I got some more lipos from Hobbyking, but I noticed that the previous 2S packs seem to be discontinued and the only tiny 2S packs they have now are the "Compatible LOSB0863".

I didn't really notice this before I ordered, but they look like this (see attached).

The discharge plug is different, but I can change that. The thing I didn't spot, is that the balance-charging plug is ALSO different from the other packs. The previous packs that nearly everybody uses have a JST-XH connector (pitch 2.5mm) but this pack has a 2mm pitch JST-PH. This is good because it's a bit smaller, but bad because it doesn't fit any of the most popular chargers.

Anyway I've hacked up a conversion cable now and it does charge... I only almost created a fire while doing that

On the plus side, they seem to be rated even higher than the older packs and they aren't any heavier.

SO if you're buying some of those, remember the balance plug is a JST-PH 2mm. 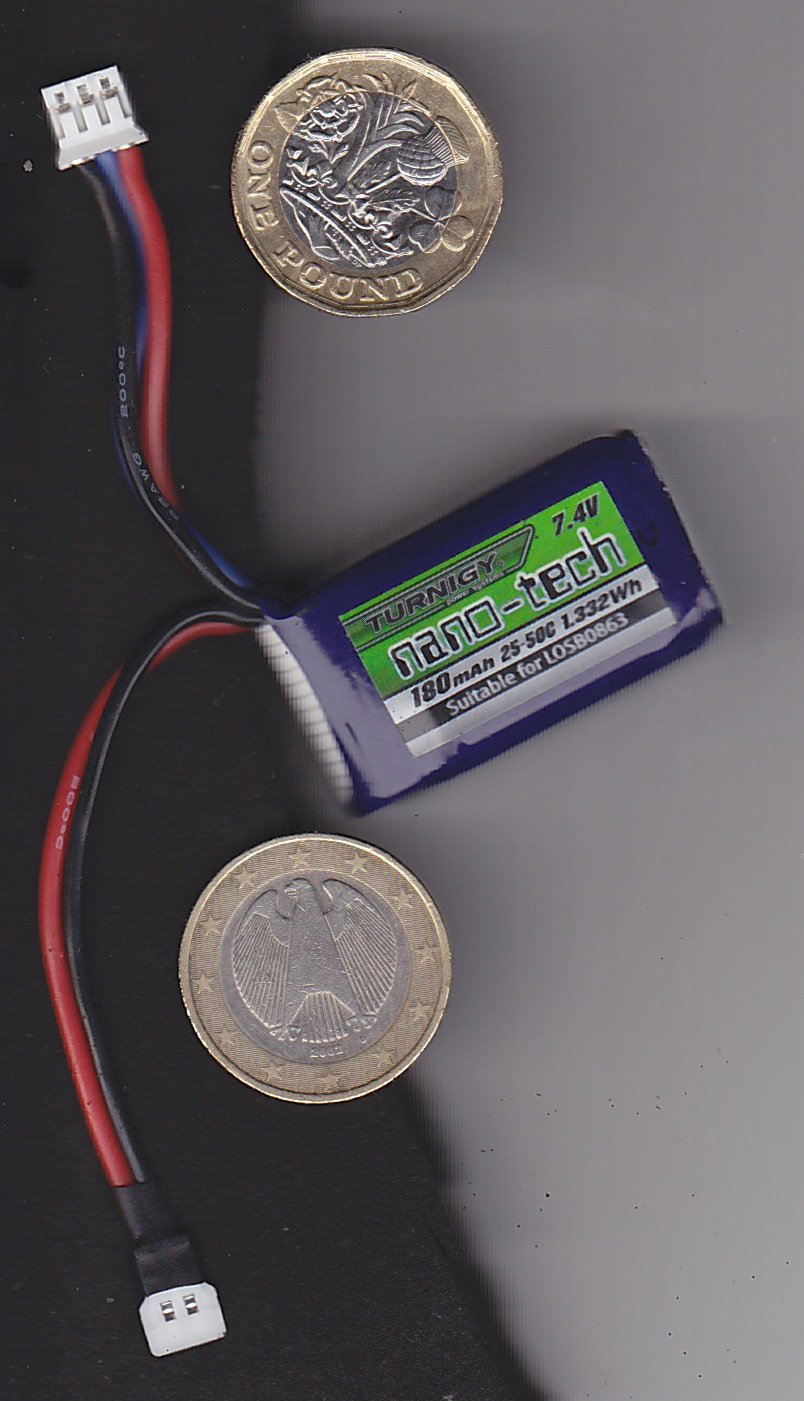 Yes - I spotted that too and had a mild panic. I don't even want to imagine what would happen if they ever discontinued ALL 2S 180mah LiPOs...

Meanwhile though, is there any reason why one shouldn't be able to charge a 2S pack using only the balance cable? My charger seems to require the discharge cable to be plugged in for any kind of charging (plus the balance lead if doing balance charging, obvs) - but wasn't sure if that was true of all chargers? I realise with larger capacity and discharge rates the balance cable might not be beefy enough to take the current, so there is some logic in the design - but with these nano units, the leads are basically the same. Reason I ask is that some of my ants are fully enclosed and I'd like to be able to charge without dismantling the shell and removing the battery. One neat option would be to make the balance connector externally accessible - but only if I can charge through that...
Stuart (Anthony's dad)
Top

I'm not sure what's happening there, any charger should be able to work with just the balance connector plugged in.

On a 2S pack there are three terminals, -, + and the "centre" connection between the cells. A balance charger needs all three to be connected, but for discharge we usually only use + and -.

Maybe your balance charger has a faulty balance connector, and it can still charge if the + and - are connected additionally elsewhere?

They should be connected internally, at least, if it a 2S charger. My cheapo charger has a 2S and 3S (JST-XH) connector and nothing else.
Robots: Betsie - RaspberryPi controlled flipper bot with gyro stablisation - too clever for her own good?
Stacie - tidy flipper; 4wd driven by hair bands
Top

MarkR wrote: ↑
Fri Oct 25, 2019 8:07 am
I'm not sure what's happening there, any charger should be able to work with just the balance connector plugged in.

Theoretically yes, however having the main leads plugged in is a requirement on a lot of the chargers aimed at higher power batteries. Simply as you can't push much current through balance plug and if the charger is assumed to be used in batteries charging at a few amps it will have been programmed not to charge without the main power leads.
Nuts And Bots - For all your components and ready built antweights!

i had some of these before with the smaller Ballance plug, i found i could get my regular charger to fit with some wiggling so the outer 2 pins flexed inwards a little...

it didn't clip into place like normal but it charged ok and the pins returned to original position when i unplugged it.

i did later replace the plugs with some from old/dead 2s lipo's i had so now all have regular ones. but in a pinch, you can get away with some gentle persuasion.

just be sure to make sure you have the correct polarity... i didnt ever accidentally plug it in the wrong way so unsure of the consequence of this but i imagine it wouldn't be good
Team Rocket
Esper(4wd flipper)
Mantis (4wd grab 'n' lift)
Dominus (Vert SPINNAAH)
Breakout(modular cluster)
Remembering Rex (antweight cassius)
Fennec (4wd flea) former world champion
Top

Looks like Alex is right - protection against overloading with much heavier duty batteries. But I think I can get round it by making a Y-shaped adapter cable with the JST-PH balance connectors wired through as normal, plus a couple of wires spliced onto the outermost leads and connected to a JST-XH connector for the discharge plug on the charger.

@Shakey thanks for the info. I suppose for the bigger batteries, they just charge them at higher current through the main lead, until it's nearly full, then balance the last bit

I managed to short the pack very slightly while checking the voltages, but I think I got away with it, my meter probe only got very slightly welded to some test leads I had sticking out.
Robots: Betsie - RaspberryPi controlled flipper bot with gyro stablisation - too clever for her own good?
Stacie - tidy flipper; 4wd driven by hair bands
Top
Post Reply
7 posts • Page 1 of 1