So I've finally decided to get into combat robots, and I'm building one or two antweights aiming to go to the AWS at the end of June (conveniently after my exams!). My plan is to go for a front hinged flipper (Firestorm is one of my favourite heavyweights).

I've also got a load of 1.5mm HDPE for chassis and armour. If I've done my calculations correctly (which I have no confidence I have!), then I should be able to get two layers of the stuff all over the robot, giving me 3mm.

I started with some rough sketches on paper, which quickly evolved into me learning Sketchup Free to create some 3D models. 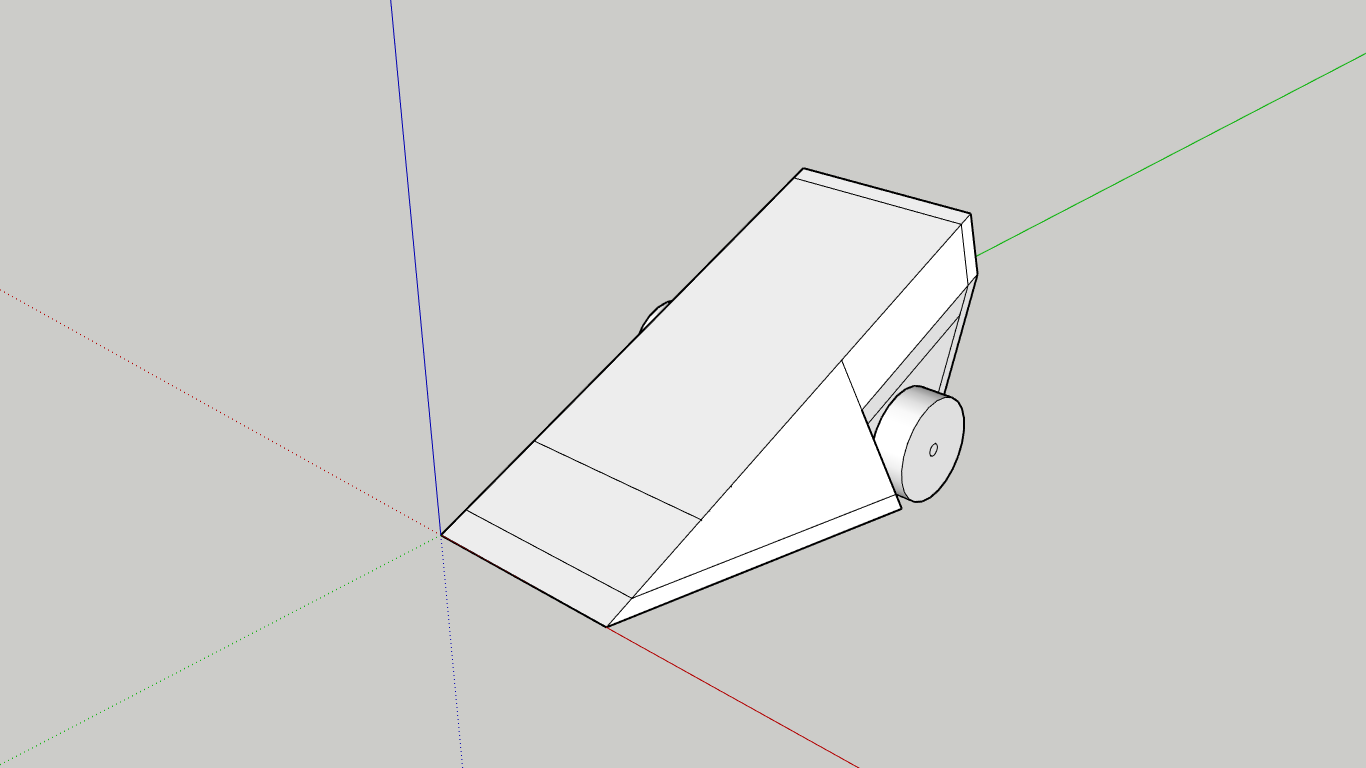 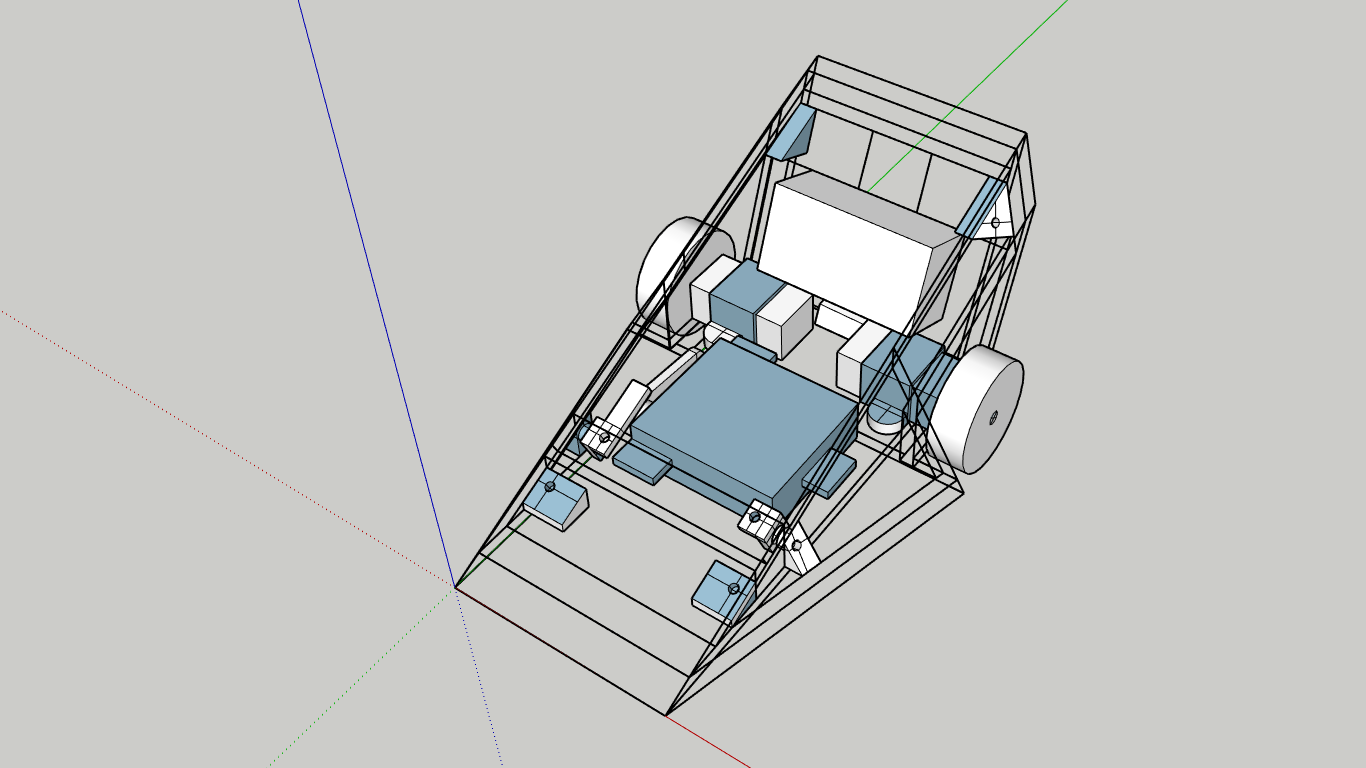 Sketchup was quite useful for arranging the internals inside the robot and measuring everything. 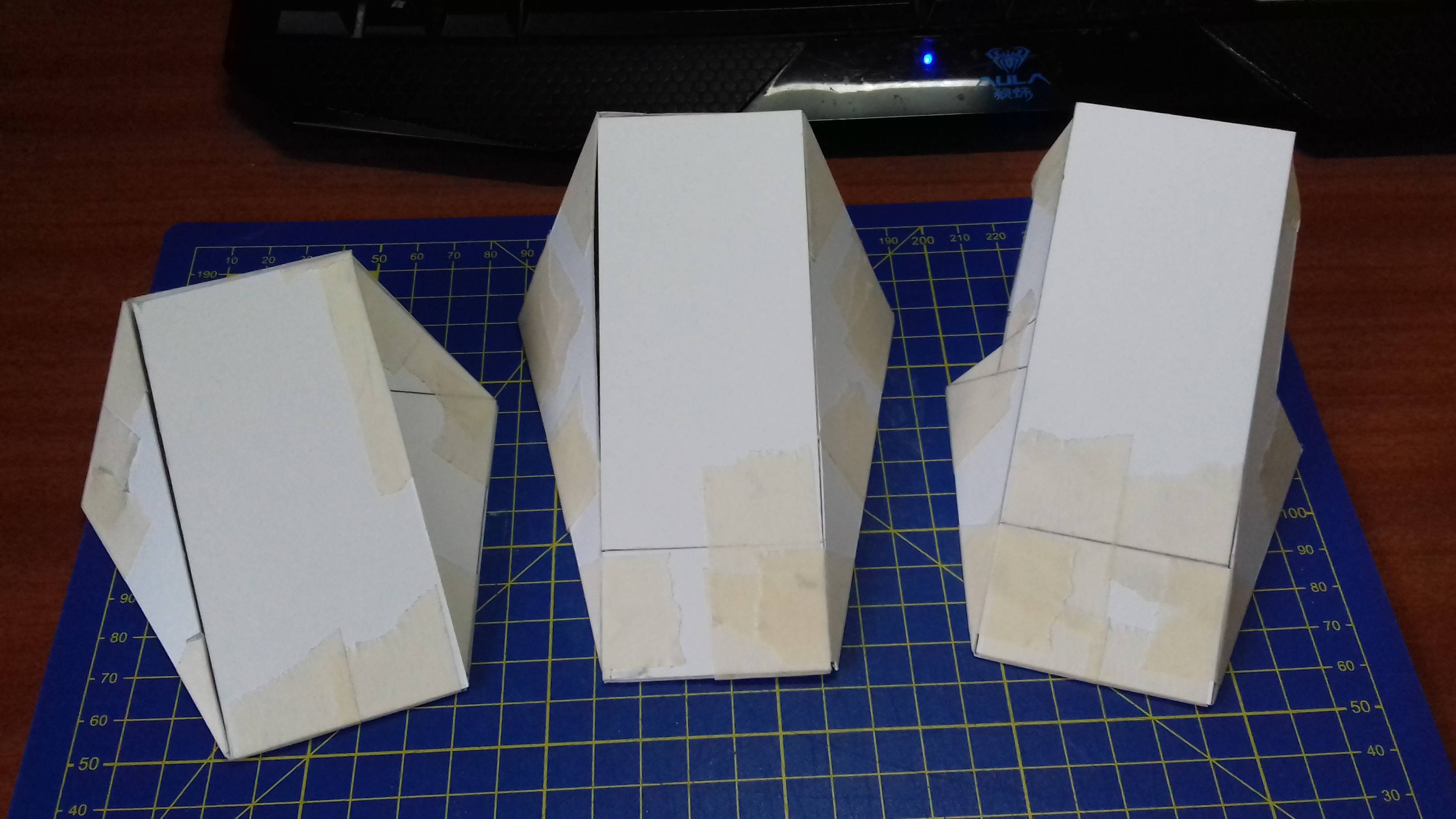 I've made three mock-ups out of card. From left to right- the first one I found was too small to fit all of the components inside. Then I found out that I don't have to rest the bot on its wheels when fitting it into the 4" cube, so I redesigned it larger, moving the pivot point for the flipper higher up when I started thinking about how I would hinge it. The wheel placement meant that they would protrude through the side panels, so the third iteration has those bits cut out, as the remaining side would be flimsy and more or less useless.

The idea is to armour up with the HDPE panels screwed together with brackets. Currently, I'm seeing if I can get some brackets 3D printed for me by a friend, once I have those I should be able to put together the first version of the bot.

As an aside, I think I'm going to go with computing themed names for my robot. This'll be called "Hello, World!", after the first program every programmer writes

Looking good so far, I've never seen anyone use a slim wing servo in an antweight before so that should be interesting to see. How are you planning to hinge the flipper?
Top

I picked the slim wing partly because of its shape so it would fit into where I wanted, also because its specs seemed pretty decent for its price.

For the hinge, I've got two brackets near the front which I'm using to screw the side to the bottom. I added a peg to each one which the hinge will pivot around. In terms of actuating the flipper, I've added an attachment point which I'm going to thread some thick steel wire through, connecting it to the servo arm. Hopefully that makes sense (I would upload an image of the 3D model to help explain but Imgur isn't playing ball right now).

The problem with this setup is that I need to leave some space in front of the pivot point so that there is room for the front edge of the flipper to move. Also, I have no idea how resistant to damage the setup will be.
Thomas 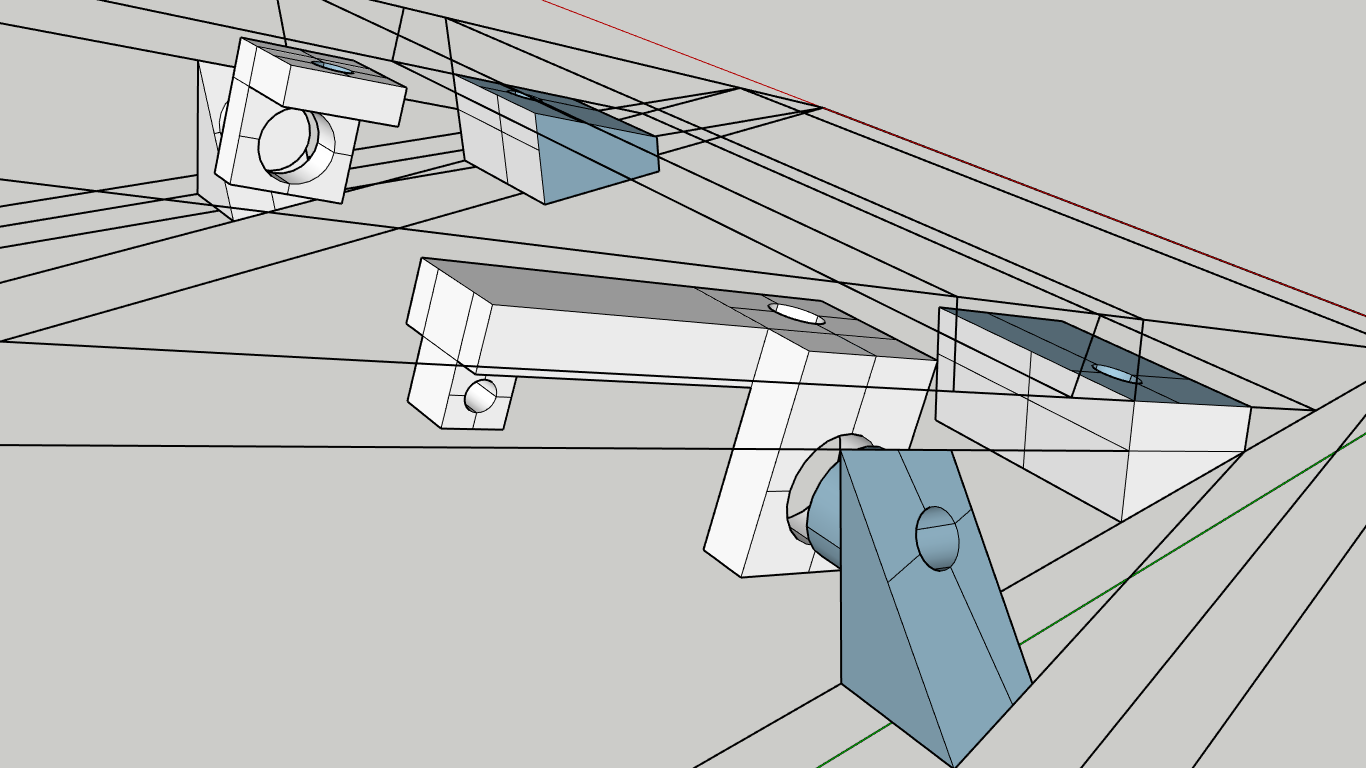 Looks really good, but I would recommend the Turnigy tgy-306g servo instead of the one you listed. It's the same weight but three times faster, which will give you a much better flip. Also, the slim wing one is looks to be only rated for 6v, so it might overheat if run from the full lipo voltage.
Team Zero - AWS 58 Champion!
Zero - rambot - - Axiom - axebot - - Valkyrie - drum spinner
Blueprint - rambot - - Vampire - horizontal spinner - - Particle - ???
RBMK - quad spinner gyro walker - - Duality - dual spinner gyro walker
Top

The tgy-306g is a lot faster, but I'm not confident enough yet with my electronics skills that I wouldn't damage it and waste money! But it's definitely something that I would consider in the future as an upgrade. My main objective is to just get a working robot first.
Thomas

My bad! Yes it can handle the full voltage, I must have misread the specs. Fair enough on starting with a cheaper component if you're not sure how things work yet, at least they are the same weight so it's an easy enough swap when you've got the hang of it.

I've got the basic shapes cut out of the HDPE now, next step is to cut out the openings for the wheels. 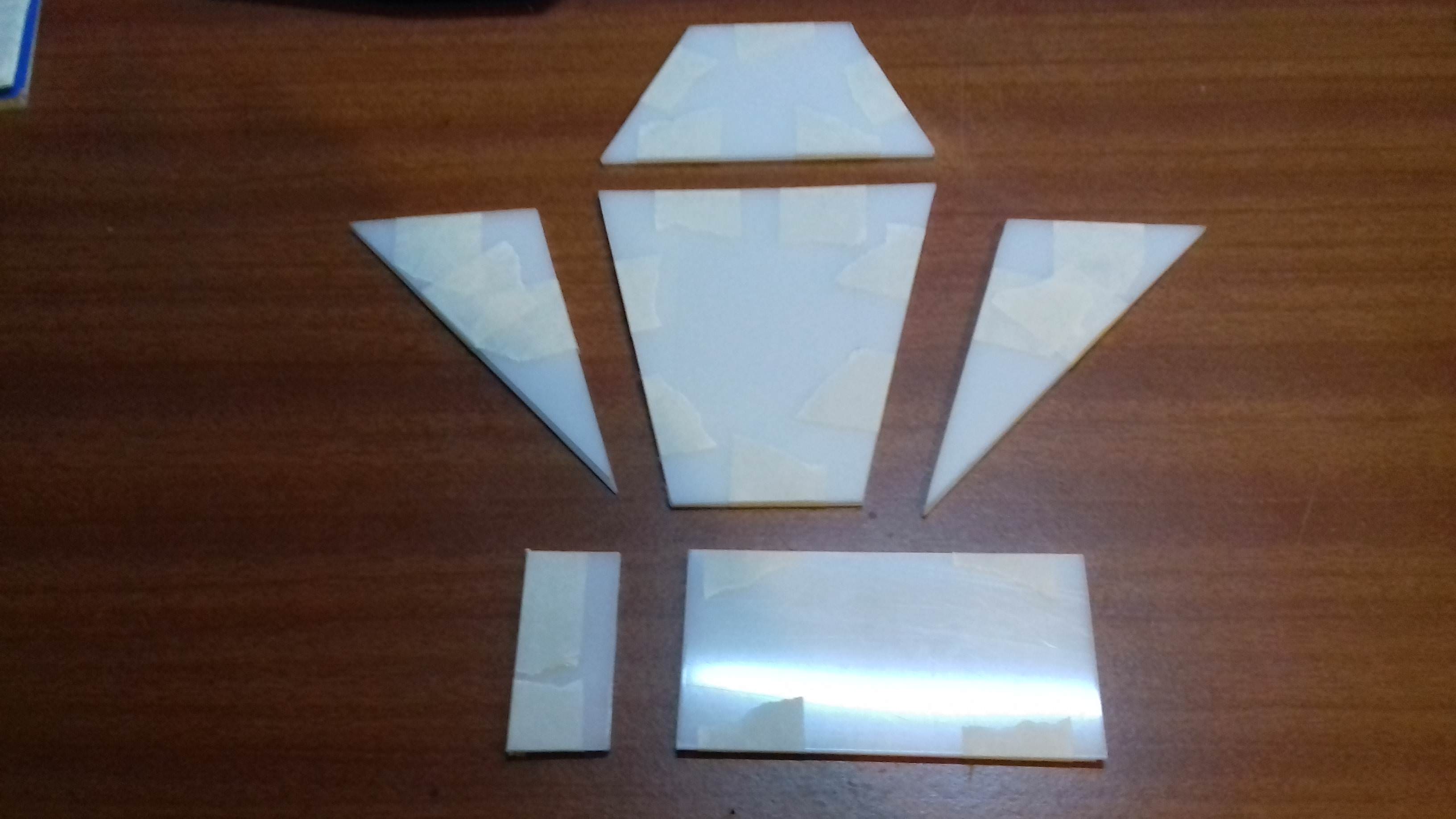 I also need to sand off the edges so they're flush, and angling the edges correctly. A friend was kind enough to 3D print the brackets for me, I should get them in the next few weeks, then I'll see how accurate my measurement and cutting is!

I think I managed to damage my NanoTwo by accidentally letting two of the motor wires touch, it didn't bind to my transmitter the first time I tried and in following attempts, the LED wasn't flashing, so that needs to be repaired. Lesson learned for next time- make sure any exposed wires are covered up.

So what is a student to do when one source of procrastination is put on hold? Find another one! I had a chat with a friend about computing related robot names and came up with 'Percussive Maintenance'. A quick google for mini-spanners and now I have an idea for an 'axe' bot armed with a mini-spanner instead of a proper axe or hammer!
Thomas

I've got the cut-outs done for the wheels now. I used copious amounts of masking tape to put the armour together in the shape of the final robot. 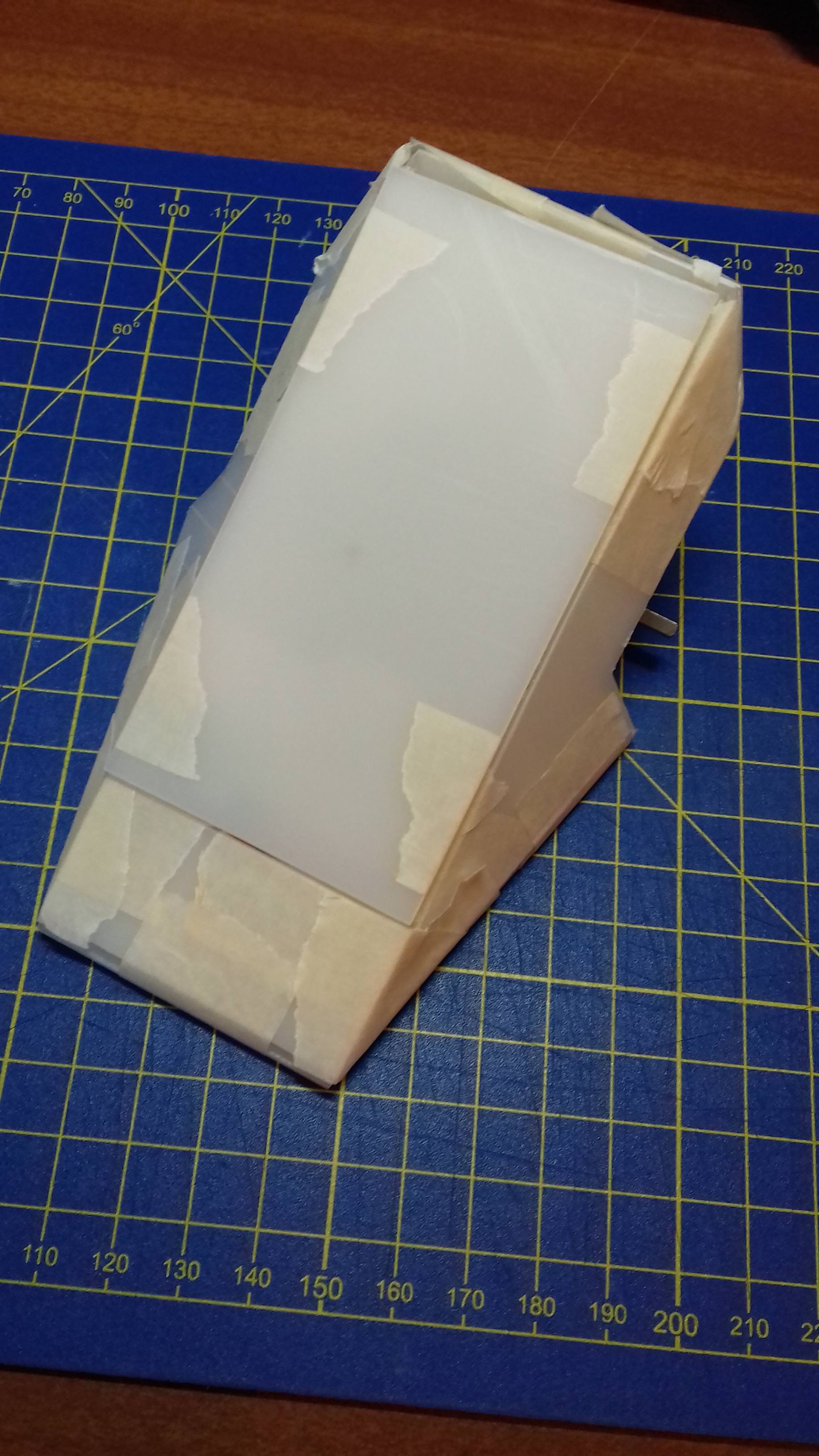 I've also test fitted some of the components inside. They fit! 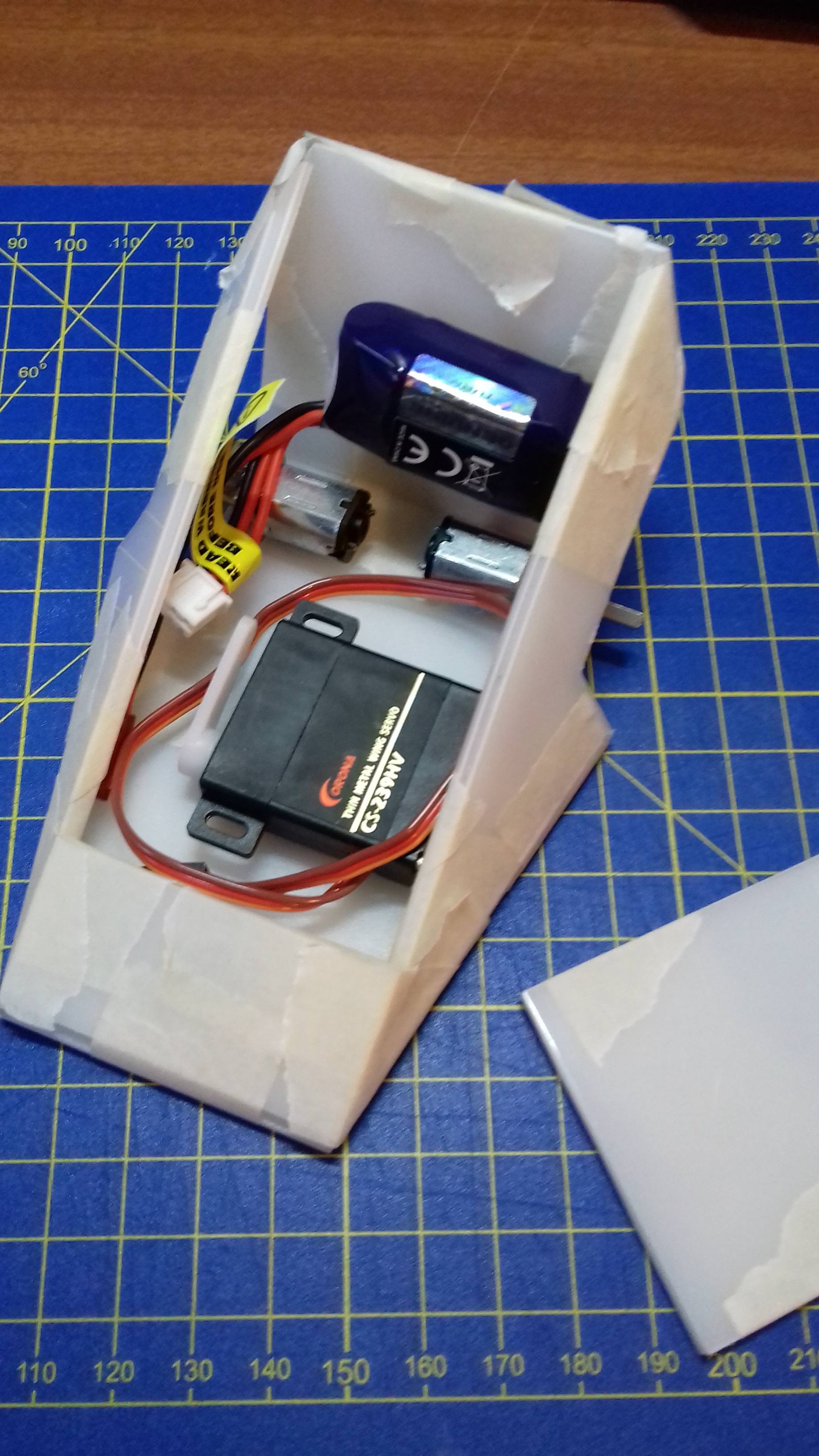 The bonus here is the weight of all of this so far is just shy of 121g. So 29g for the NanoTwo, wheels, screws and brackets, I should be fine (and I can just drill some holes to save some weight if it comes down to it).
Thomas

Looking great, particularly for a first attempt. I'm rather fond of those servos, used them in the past.
Dave
Die Gracefully Robotics - Barely Even a Proper Team.
Top
Post Reply
194 posts