Please post all questions and answers in here. This way people can easily see if someone else has the same problem.

Being a Description and full and frank Account of the Testing of an exciting new Brand of Motor Controller from the Orient
by a reknowned Moron of few Talents and a frankly poor Grasp of the English Language, with Apologies

The price of antweight speed controllers has gone down a bit over the years. First they were available only from the colonies, and as such the price fluctuated depending on what mood the world economy and US dollar were in. Then, like a beacon in the darkness, Peter Waller came forth with his tiny speed controllers for reasonable prices, halving the average price from about £60 to £30. This price point has remained about the standard even since Rory arrived, took the beacon from Pete, and rigged several dodgy looking headlights to it to blow the darkness away entirely. (There's also the Sabertooth, which about half of the forum had as their first controller despite them weighing about as much as a baby elephant and costing about £80, but we'll gloss over that)
But, short of resistors and servo boards, what if you could go even lower, and have a fully functional dual-channel speed controller for around 12* British pounds? From the combined forces of Chinese capitalism and comedy names come Banggood *snigger* and the DasMikro 2S6A**, which were initially spotted by Micah Leibowitz on the Facebook, and which I decided to order a couple of last month while watching the closing stages of the Olympic marathon.
They arrived today, three weeks later, which is fairly reasonable by China*** standards. So, what exactly does 12* British pounds plus free shipping get you? It gets you this: 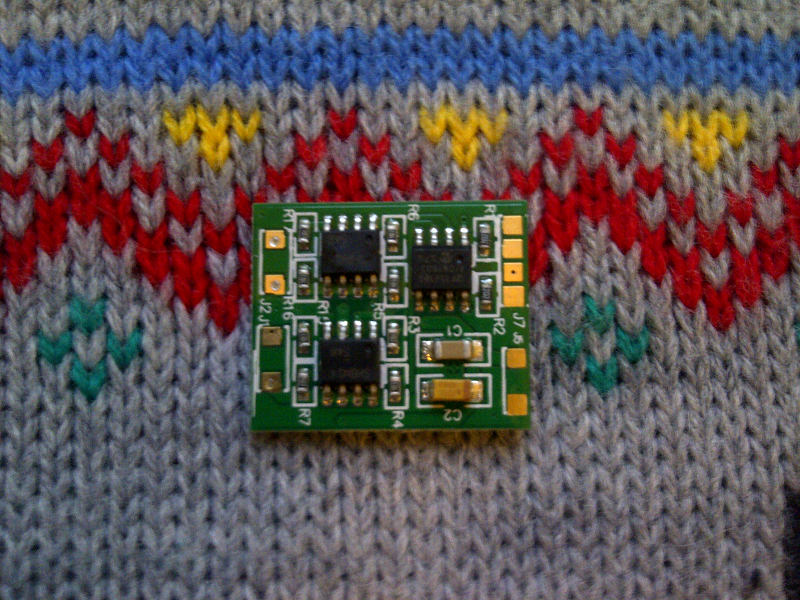 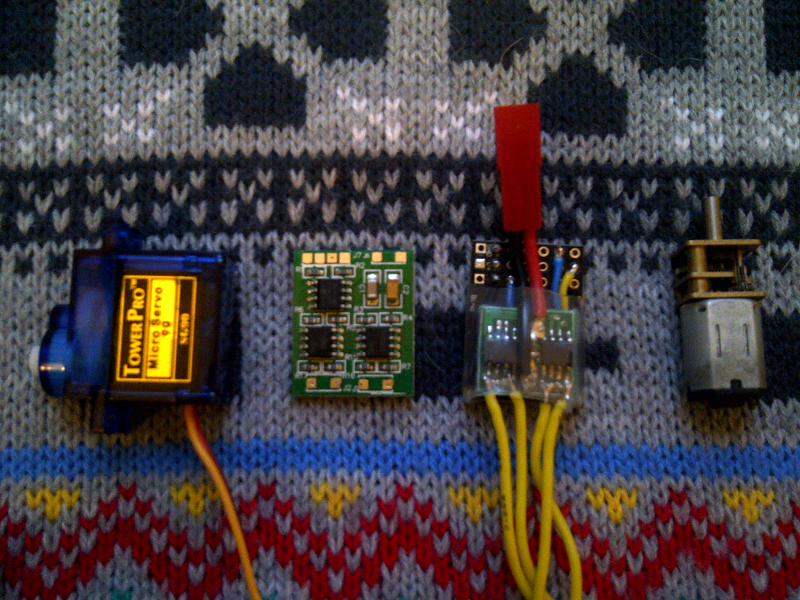 Next to a few other common antweight parts for comparison. Weight fully wired up is about 5g, the board is really quite light.

Talking to Rory he mentioned it looked quite similar to the NanoTwo, using a similar PIC and four SH8M14 chips to drive the motors as half-bridges rather than the full-bridge chips he uses. The regulator used is a fairly beefy 1A one so you can probably run a decently sized servo off it, although I think most people just run them on full battery voltage these days. It comes as just a bare board with slightly odd connections, so reasonably precise soldering is required, although they do provide all the cables needed: 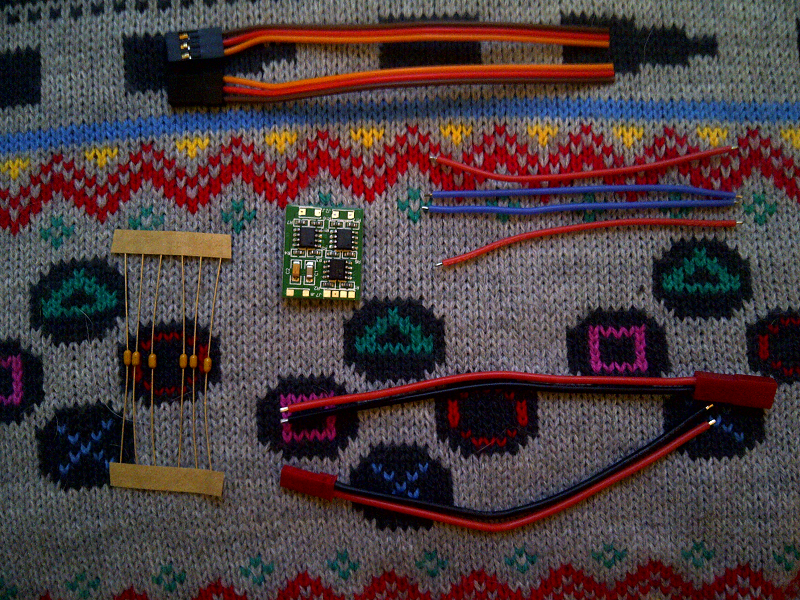 The power and motor wires are really nice silicone ones, although this is compensated by the signal ones being horrible PVC ones that almost certainly harbour some kind of disease.

I hacked up a quick test chassis using the base from a joke entry long since passed, the Pololu 50:1 HPs out of The Hurting, an OrangeRX, and some wheels I had lying around. In the spirit of science, I christened it "The Sacred Chariot Of Swakopmund", which I trust is a suitably impartial and fitting name. 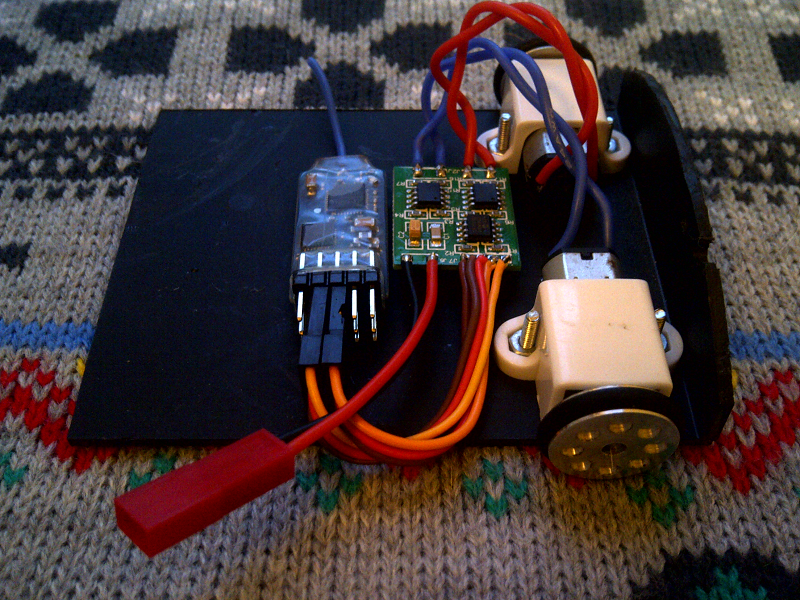 Swakopmund is a coastal city in Namibia (population ~30,000 people) whose name literally translates to 'bum mouth'. Someday I shall move there as it is clearly my spiritual home.

And so to testing it all worked! (via the medium of an absolutely terrible video)

Well, for something that costs £12*, it works far better than it has any real right to (in that it works at all!). It handles the motors no problem, the mixing is surprisingly good, and out of the box it's actually not too bad - most of the erraticness in the video was from me having the controls backwards and so not really knowing what I was doing (so no change there). Compared to a Roryboard or one of the Peter Waller controllers, the deadband is really large, and outside the deadband acceleration is very quick, but it's fairly usable in all honesty with smooth control. There doesn't seem to be much braking, though, and while this isn't too much of a problem going from forwards to reverse quickly, it does mean the motors run on a little bit if you let go of a stick. This is annoying, but workable, and feels a little bit like driving in a slippey slidey ice world. I only ran the Chariot on 2S, but I ran it for a good long time (about fifteen minutes) without noticing any discernible warming of the driver chips or regulator.
Rory thinks it should run alright on 3S, and I'll leave that judgment to him as he's ordered one to destr-test. A man of science I may be, but I'm a man of science on minimum wage and I'm loath to detonate something that works!

In conclusion: Honestly, I think this has some potential - being PIC-based, it might be possible to tweak the software a little so it functions a lot better - again, I'll defer to Rory on that - and the stock software isn't all that bad, I'll probably assemble something more competitive to give it a proper run-out at the next World Series and see how it copes in combat. It's not without its flaws, but yeah, a working dual channel controller for less than £12*. It might be possible to have a complete antweight built for less than £50 before too long...

*more or less. £12.22 at time of writing. Subject to market fluctuations and inexplicable referendum results.
**you'll want option A for the mixing, or option B to use in-transmitter mixing.
***or, if the shipping label is to be believed, Vanuatu. Sadly you don't get stamps...
Joey McConnell-Farber - Team Picus Telerobotics - http://picus.org.uk/ - @joey_picus
"These dreams go on when I close my eyes...every second of the night, I live another life"
Top

*Sigh* I don't want to have to try and price match China..

That is a game you will never win.
Top

Been looking all over for a review on these well done!
Top

I've also got one of these winging its way from vanuatu. I can't imagine I'll be using it in my ants unless it is absolutely spot on in terms of control. A decent ESC can last forever, so is worth investing in. But for fun side projects, it's finally nice to have a cheap option, that is (hopefully) more reliable than servo boards. And if some of the brighter sparks on this forum can sort some improved code, then all the better.

These seem like they may well be a decent cheaper entry option for new builders like myself. Whilst I am all for quality, for an initial starter these may be a decent option.
Team Mordschlag - Antweights and Featherweights
Top

Sounds really good. Is anyone able to explain the mixing in a bit more detail please as I know there's 3 different tyres on this chip. I've read a bit about steering with one stick left or right being mode 1 and 2 but never fully understood it. I always thought the left stick moves the left wheel and the right moves the right?
Team Shinobi
Top

Skillz wrote:Sounds really good. Is anyone able to explain the mixing in a bit more detail please as I know there's 3 different tyres on this chip. I've read a bit about steering with one stick left or right being mode 1 and 2 but never fully understood it. I always thought the left stick moves the left wheel and the right moves the right?

Mixing means rather than left stick doing the left wheel and right stick the right wheel it's separated into steering and forwards/reverse. So one stick will do steering and another reverse. In this way both sticks control both motors but it's a much better way to drive.

Mode 1 or Mode 2 simply refers to which side a transmitter has throttle on. This normally decides which side your forwards/backwards will be on as you don't want that on throttle as the stick is unsprung and won't return to the centre.

One problem with this ESC is the lack of centre braking which means the robot doesn't stop right away when the stick returns to the middle but carries on rolling. I might order some and look at fixing the firmware to achieve this. I don't see anything in the ESC's design that would prevent this feature being added. Though some more PIC centered people might want to have a crack at ti as well.
Nuts And Bots - For all your components and ready built antweights!

Good review....thanks for taking the time. I was interested as the price is about the same as buying two standard servos and robbing the boards (if anyone wants some remains of servos let me know) which one do for the starter kits on here.

It would be interesting to compare the options. I would guess this is smaller than servo boards, but 1A isn't a lot at stall. Also, have they had any kind of CE testing? *knows answer*

The 1 A is the 5v BEC I think the drive current must be the 6A presumable per channel as the drive chip FETs are rated at 7A continuous.
They must be popular I see the A option which we would use is on back order.
Top
Post Reply
33 posts

Return to “Questions (and answers)”