So, further to earlier discussion under the thread 'Pre modded servo boards for ESCs', I did some more testing over the weekend. Not as much as I would have liked (weather was OK so had no excuse not to be repainting window frames

) but enough to spark my interest. As per that other thread, idea was to test use of the tiny speed controllers taken out of servos which were designed with a) continuous rotation, and b) digital control instead of variable resistors.
In theory, such controllers should be suitable for use as single-channel reversible ESCs with no further tinkering. I had two such controllers to test, taken from the Dorman RC servos suggested by Ant Ipodean and the FT90R from Feetech (former are ~£1.50 each from AliExpress when bought in ten packs, latter are around £3.00). Both are pretty small boards, though the Dorman's (top of each pic) are smaller: 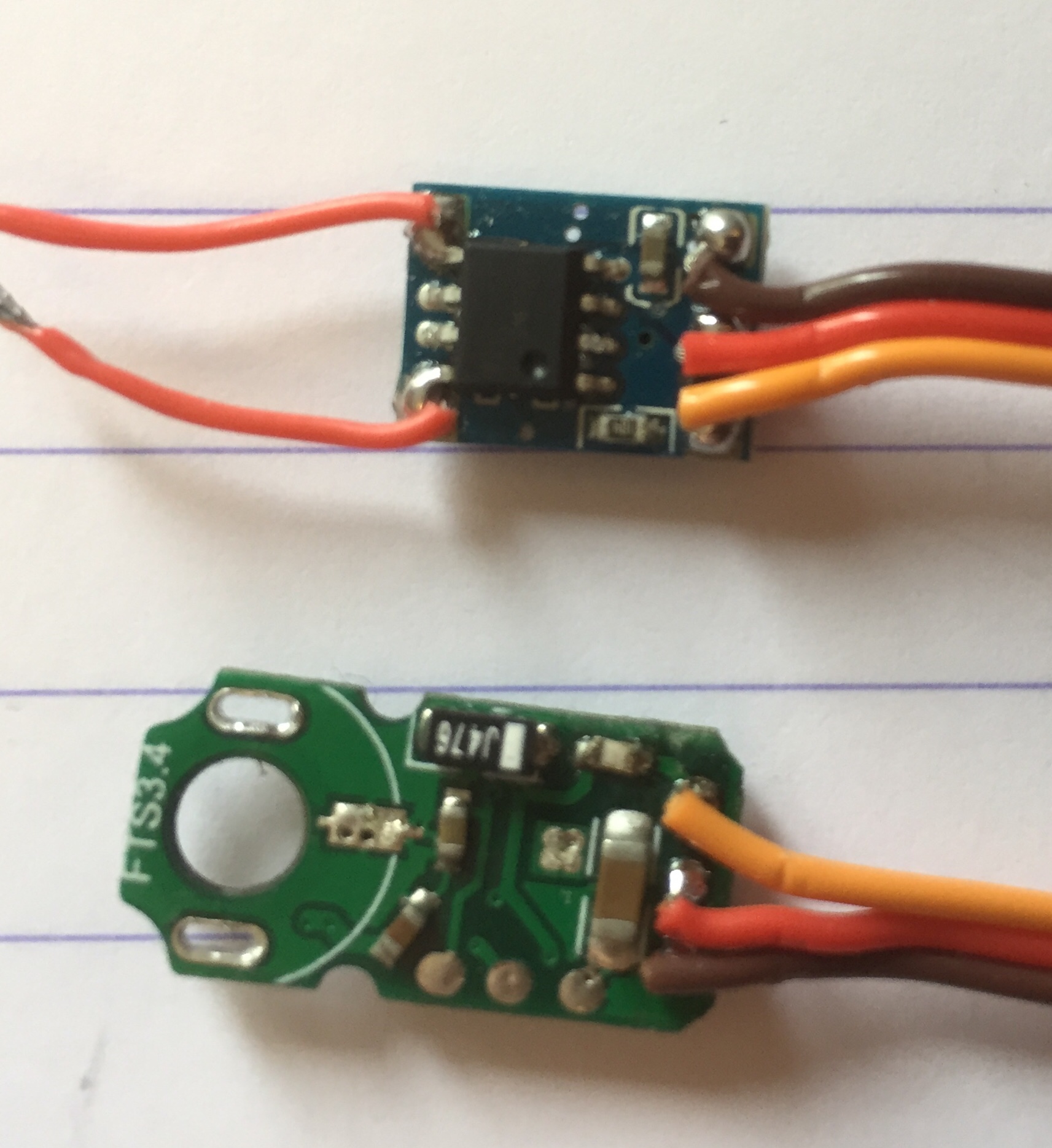 The Feetech has the motor soldered directly to the board, hence the odd shape and large solder-through holes. 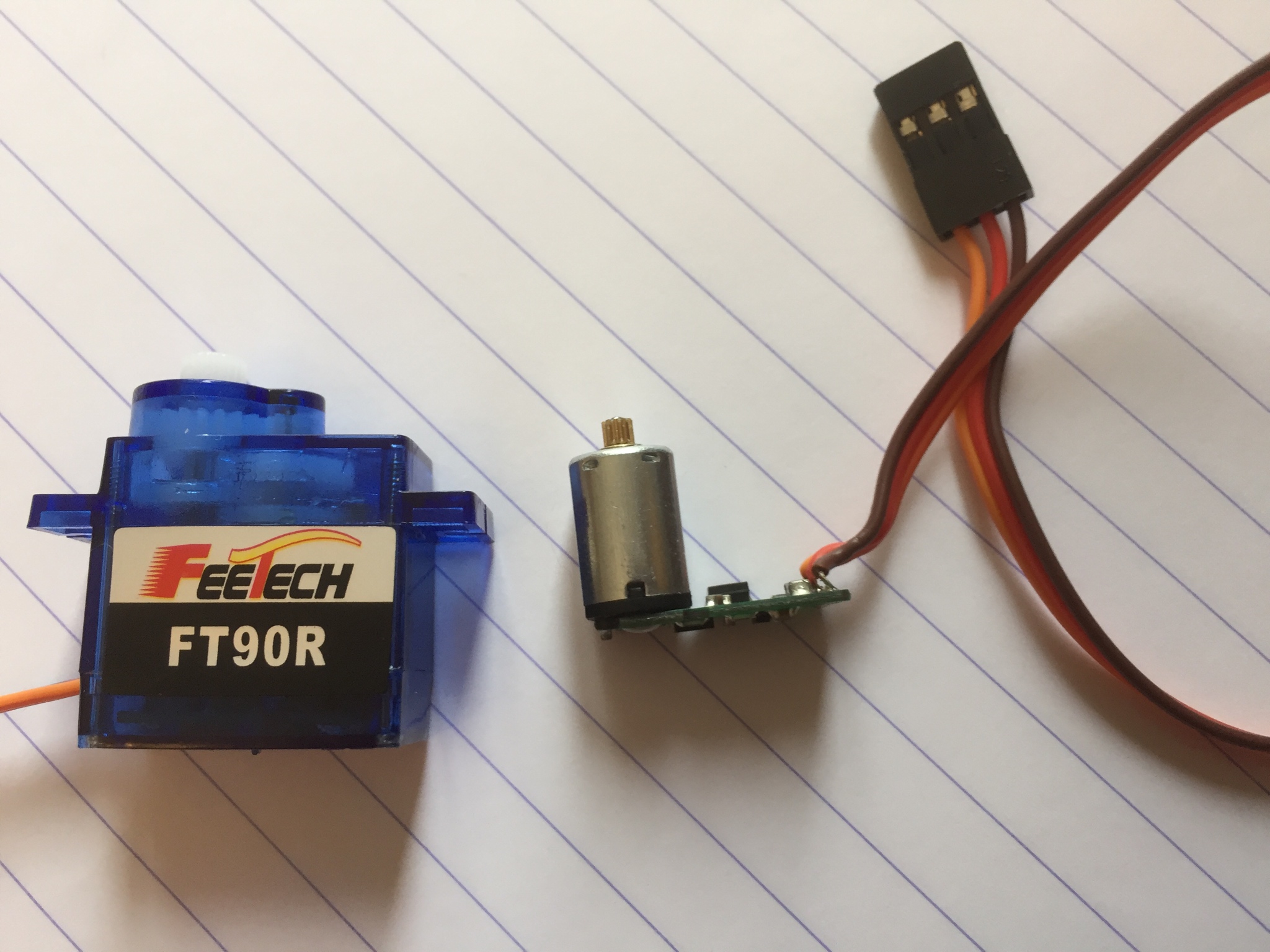 After careful retesting I basically got the same results noted previously, i.e. the Feetech boards behaved perfectly (clear dead-band with 0v and full voltage at stick limits) while the Dormans showed around 0.5v in 'neutral' and didn't provide full voltage to the motors. These results were the same regardless whether I had a motor connected to the output or just the digital multimeter, so I don't think it could have been a back-resistance issue. Testing with just a motor, the Dormans caused a slow rotation (10-15 rpm) in neutral and were noticeably slower than the Feetechs at full throttle. No idea why I'm getting such different results from Mike with the Dormans boards - possible I'm doing something wrong or maybe I just got a duff batch. If there's anyone for whom the slight size and cost advantages are crucial then it's certainly worth persevering with them but personally I'm going to forget about the Dorman servos for the moment and stick with the Feetechs.

So... on with my efforts to bodge together a "Poor Man's Nano" or PMN as I'm now calling it. Goal is to have a reasonably consistent little package, as cheap, small and light as possible - but also reliable and easy to drive. I noticed with these controllers there is a slight delay switching from forward to reverse but we're talking less than half a second - so don;t think it will impair driveability in real world situations. Other than that, responsiveness seems excellent, with a proper proportional response as you move the stick gradually through its range.

First step, disassembling all the servos was strangely satisfying. They're generally very well put together and dismantle cleanly: 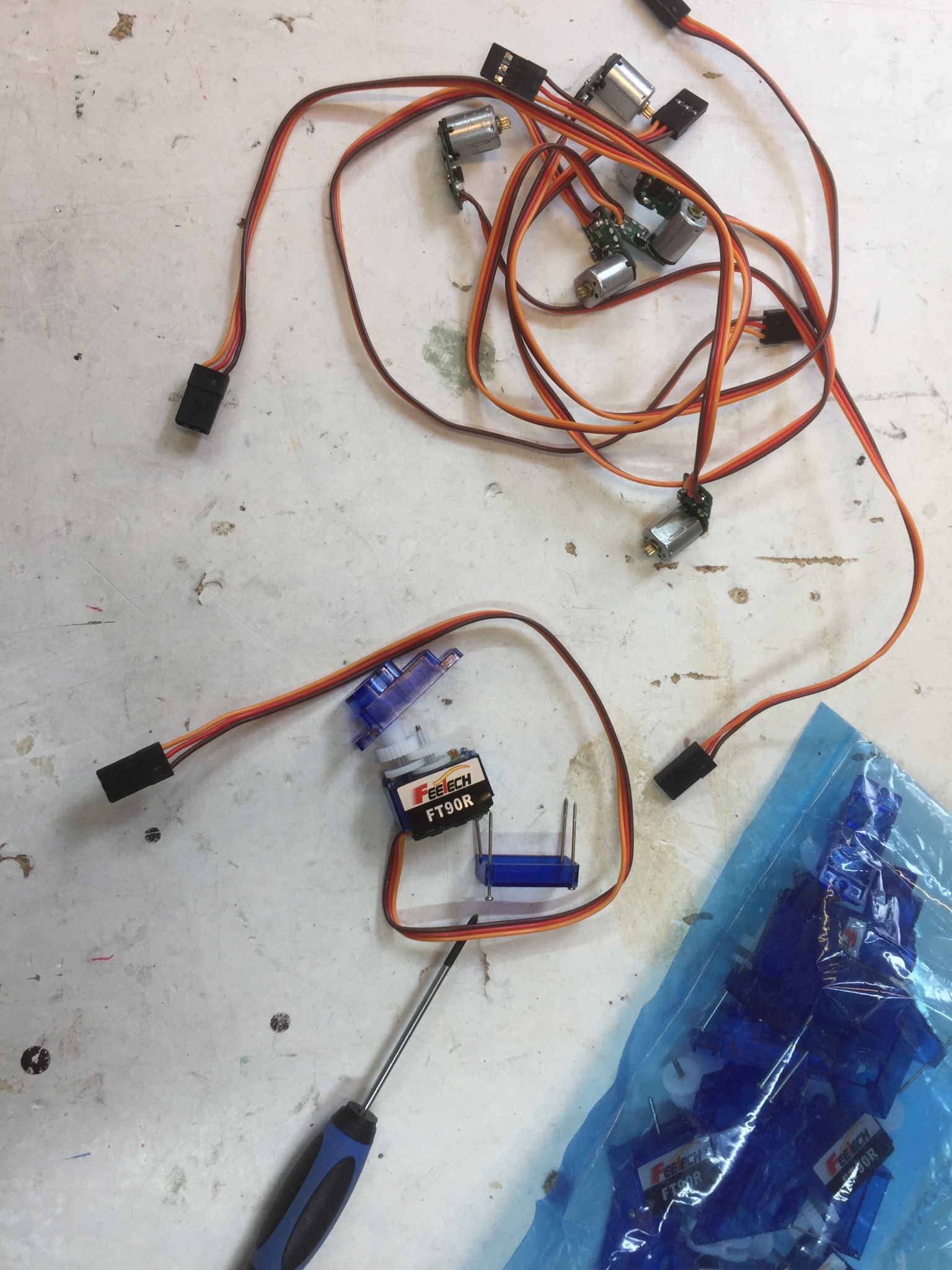 Removing the boards was pretty easy too - just hold the motor in a mini vice, melt solder on one side while gently bending the other way. All boards came off cleanly. 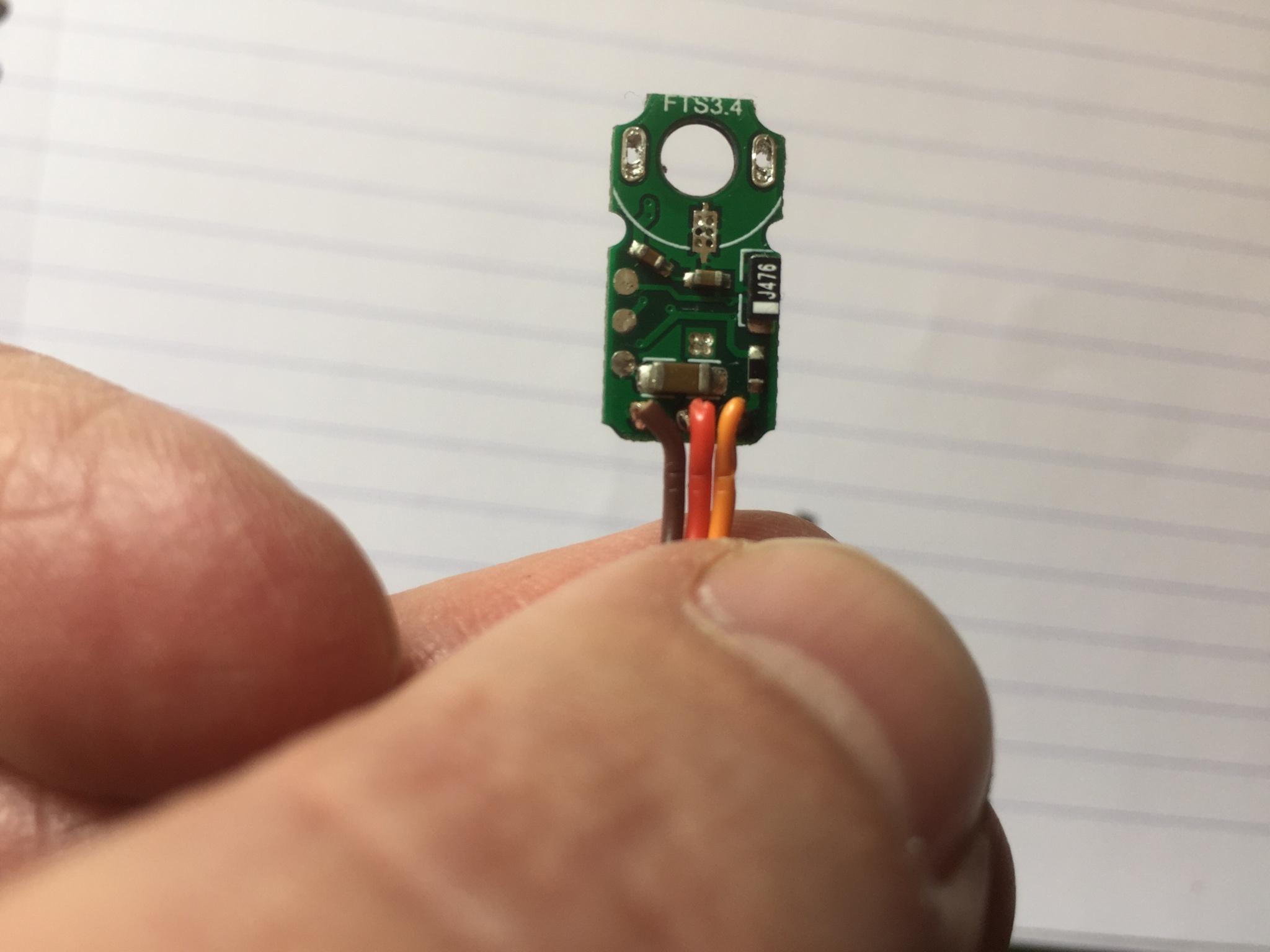 Then just cleaned out the old solder using a simple solder pump (very easy with through-soldered holes if you hold the iron on one side of the board and the pump on the other).

So - that's the ESCs sorted, now just needed receivers. In ideal world, I'd stick with the OrangeRx R614XN as they're the smallest DSM-compatible PWM options I've ever found - only they're a bit pricey at around £10 each and currently unavailable. Second best option, which I've come to rely on most of the time, is the Redcon CM421 4-ch Rx from BangGood. These are cheap (just bought a batch of 10 for £4.90 each), rated up to 10v (so no need for a BEC or voltage limiter when used with 2S LiPO) and pretty compact - except for the row of pins at one end. Futaba connectors are no good if you're after a really compact package (I'd rather have nice holes for through-soldering) - so they had to go. Having tried this a few times now, I find the best option is to slide/cut off the plastic 'comb'-like widget that holds the pins together, then clamp the board in a vice and desolder the pins one by one. It's then easy to clean out the holes using the solder-sucker (again - heating the solder from one side of the hole and sucking from the other). Takes me about 20 mins to complete. Here's how they look before and after pruning: 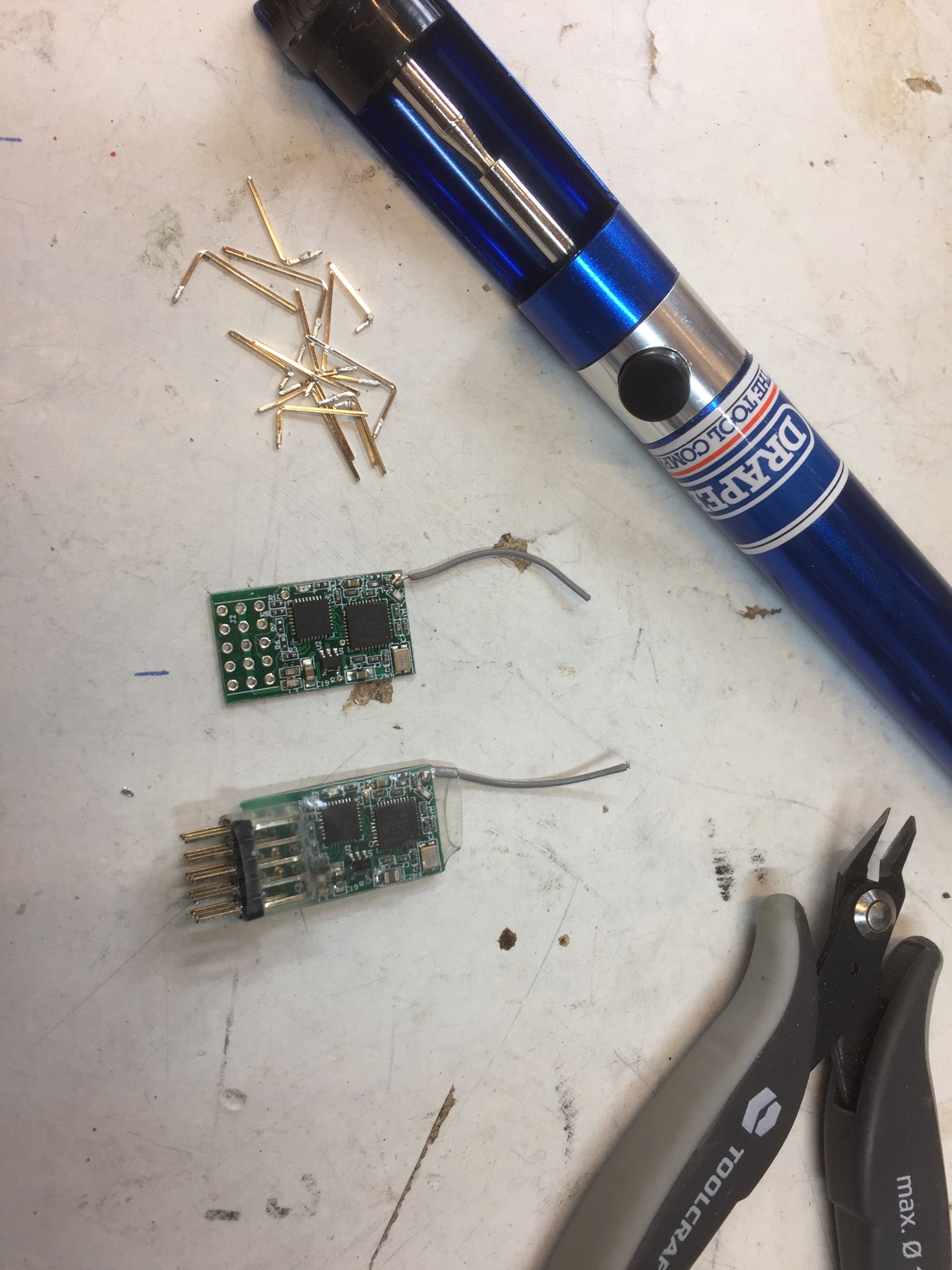 It's then a case of carefully trimming the ESC leads down to length and stripping the ends (with such short leads be very careful not to pull the whole insulation sleeve off, like I did a couple of times!) and soldering them onto the back of the Rx board, along with any other required leads. In my case that's the power supply (red & black) throttle-channel signal pin (white) and bind pin (grey - this needs shorting to GND to initiate binding), plus blue & yellow for the motor leads. I used 24AWG silicone insulated wire throughout: 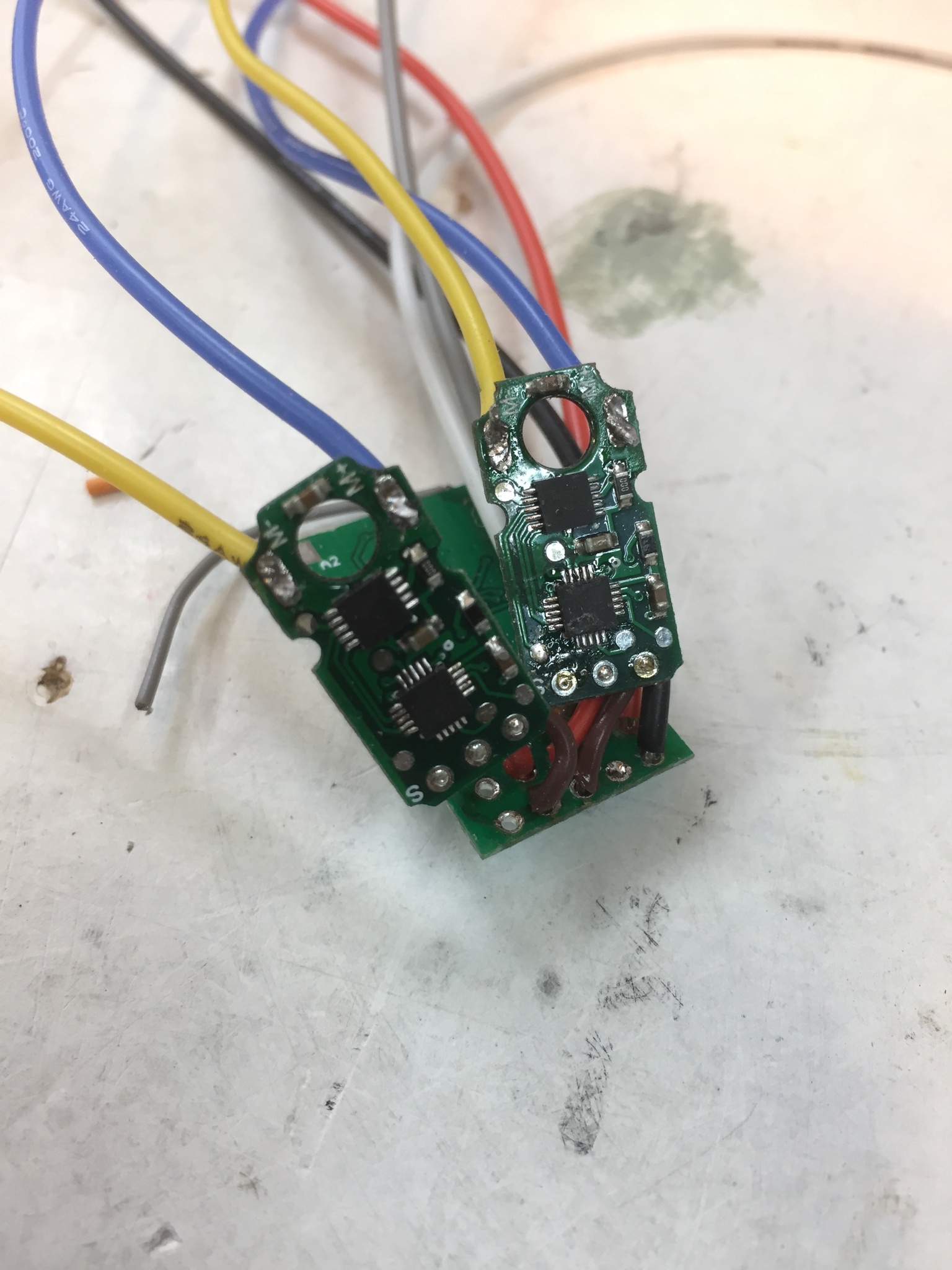 After a quick test, then wrapped the individual ESCs in heat-shrink, folded everything into place and wrapped it all up in clear heat shrink (so I can still see the Rx LED). 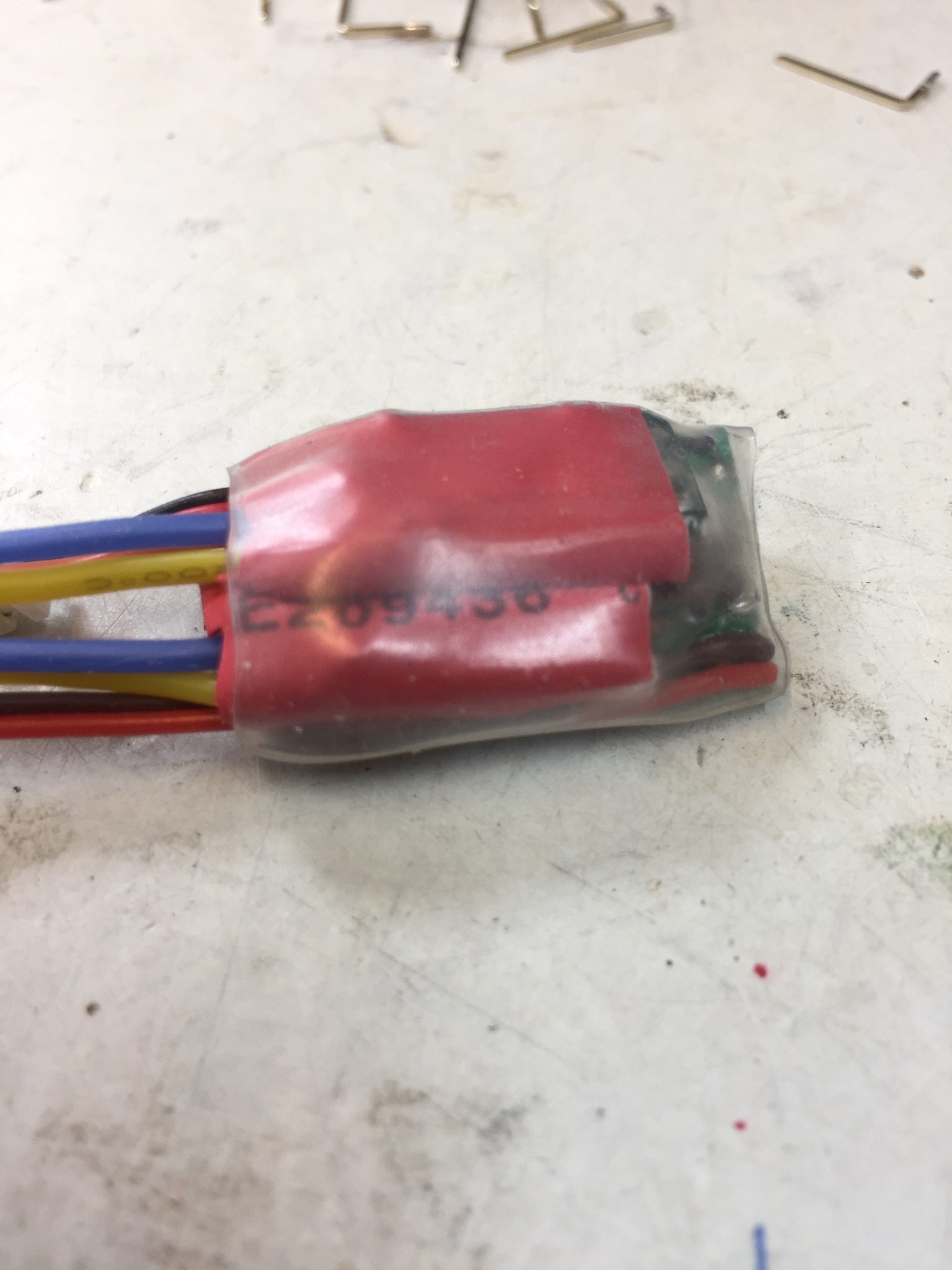 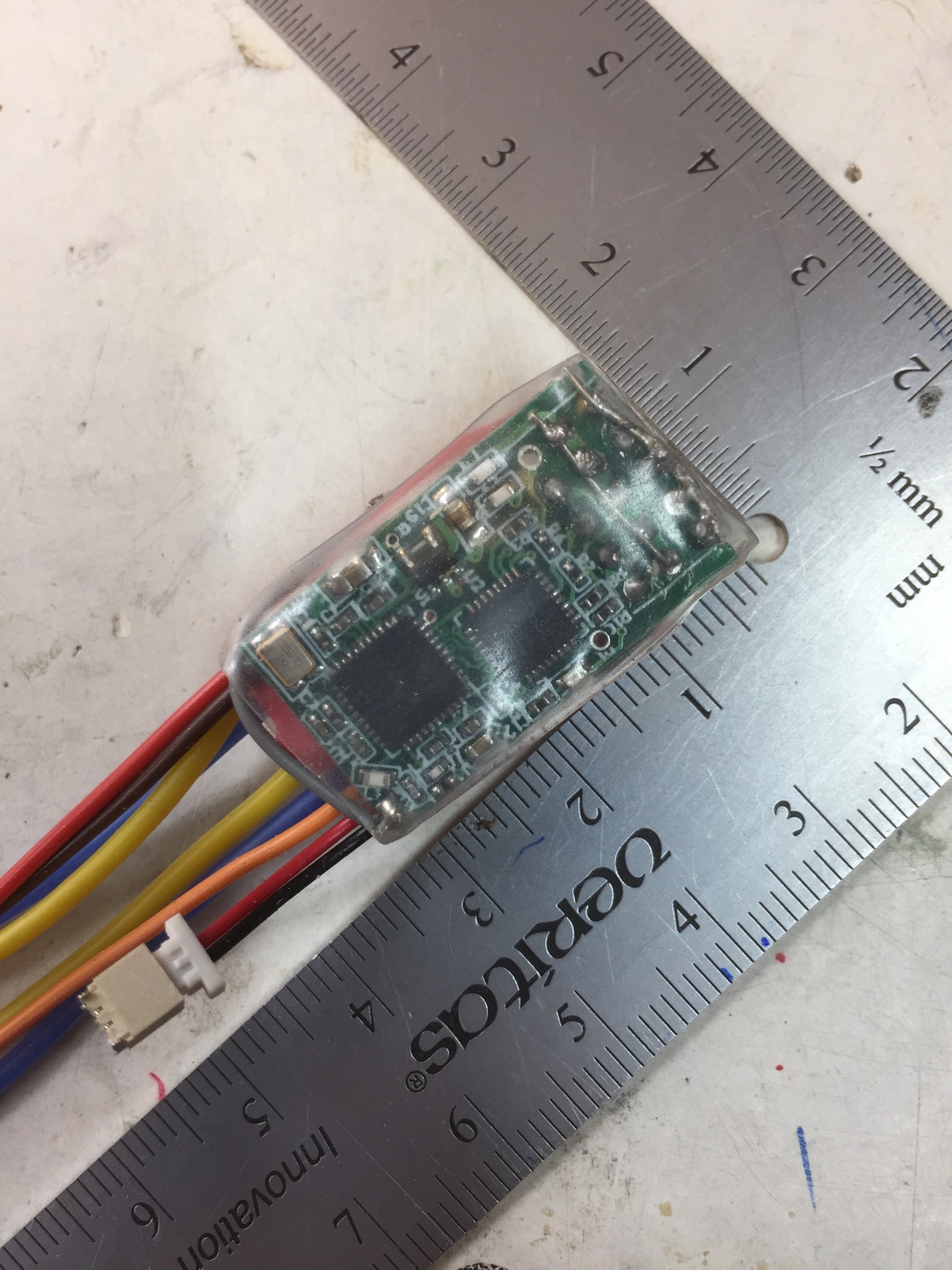 Resultant package is about 31x17x9mm and weighs 5.5g (including wires). So... not quite as dinky as a real Nano but small enough and cost less than £12 to make - so it's good enough for me! Incidentally, that tiny plug & header in the photo is a JST-SH 2-pin micro connector (1mm pitch) which I'm experimenting with for binding - plan is to have a header with the pins shorted so I can just slide that on to put it in bind mode. Weighs next to nothing and less likely than a tiny slide switch to engage accidentally.

Managed to put together two PMN units in one afternoon and both worked a treat. 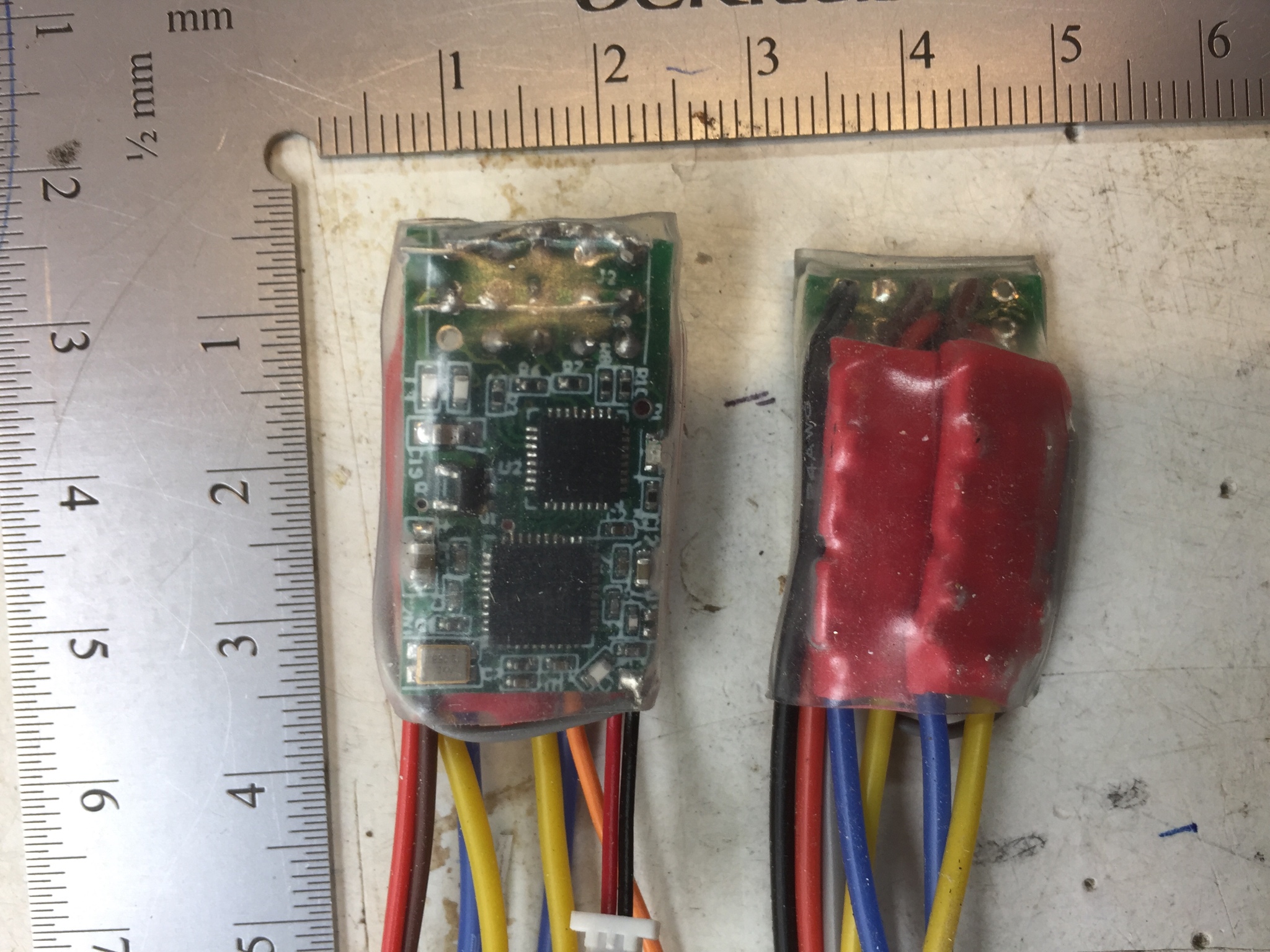 Tested using 2S LiPO and one motor per controller. Left it running full speed for 5 mins - no noticeable overheating issues. Obviously, this kind of bench testing is no substitute for the real thing, so plan is to make a quick & easy 4WD antweight and let my son thrash it around our test arena for a while. If it survives him an his little friends, it should survive anything.

That is very interesting.

Did you, by any chance, get a part number from the 8-pin chip on the blue ESC board above? The Dorman servo board? Is that the only active part on the board, or is there a small transistor too?

There are two 8-pin DIP chips on that board - one on either side.
On the side where the leads are soldered there's one marked 'FZMOS-5X 20160720'. Pins 5 and 8 are soldered to the motor leads.
The 8-pin DIP on the other side is absolutely unmarked - checked under microscope and there's nothing visible on the package. Can't see where the tracks lead either.

Other than that, there's a 662x regulator and a few tiny smd resistors or capacitors.
Stuart (Anthony's dad)
Top

Ok, I didn't realise there were two chips.

Probably one is a cheapo no-info Chinese Microcontroller, the other is a motor driver, similar to the MX612. Actually the MX612 has pins 5,8 connected to the motor.

Don't run it off more than 10V, it's outside of its spec.

I actually bought some MX612s, but I haven't even opened the packet as the rz7899 is more better* in every way.

It is very surprising to me that the manufacturers of servos haven't yet come up with a single chip which will provide motor driver and do the digital electronics in one package. Or maybe they have, but not in that servo.
Robots: Betsie - RaspberryPi controlled flipper bot with gyro stablisation - too clever for her own good?
Stacie - tidy flipper; 4wd driven by hair bands
Top

I can't find the FT90R on Feetech? I've found some on AliExpress at £4 each, but on Feetech, I can only find the FS90R. Where did you get yours from?
Jiggy Sawdust
Jammin' Good with Weird and Flippy
The Pushbot from Mars
Top

That's... Not bad. I'll see how the ones I've got play (though I fear I may have the same results as you) and may well order some of those to try out!
Jiggy Sawdust
Jammin' Good with Weird and Flippy
The Pushbot from Mars
Top

For the hard-core chip spotters among you...
With the aid of a stereomicroscope and careful side-lighting, I managed to decipher the almost invisible writing on the two chips mounted on the Feetech controller board.

The microcontroller is a 20-pin quad-flat package marked 3AQ20

The other chip, is a motor driver - 10-pin DIP marked A1096
This is an AMtek Motor Driver IC - data sheet (most of which went straight over my head

Any thoughts on the quality/durability of these components?
Stuart (Anthony's dad)
Top

The AM1096 is a very interesting chip because it's a motor driver with built-in voltage regulator, so it saves them components on the board, the LDO voltage regulator presumably supplies the microcontroller, which makes it a "true" 2-chip solution which can handle a wide range of voltage inputs (max 11v according to datasheet)

They still need a micro to translate servo pulses into the pwm signals for the h-bridge, even though it's continuous rotation so uses no feedback. I would imagine they use the same micro with an adc to do the position-based servos.
Robots: Betsie - RaspberryPi controlled flipper bot with gyro stablisation - too clever for her own good?
Stacie - tidy flipper; 4wd driven by hair bands
Top
Post Reply
14 posts