has she been to an event? it worked for my mrs... might work for you... really, it all started when she saw a spinner turn another bot to dust at antfreeze...

after aws, i was impressed with how well my carbon fibre bot juggernaut (piloted by the mrs) held up against a vertical, horizontal and a drum spinner taking mainly superficial damage (the only actual damage was from a hastily sealed join from where i extended the shell) so i have decided to experiment with kevlar reinforced carbon fibre.

not only should it have more impact resistance, but my my does it look good so i am building 3 robots with the carbon aramid which will all be practically identical.
one for myself, and one each for the mrs and my son... all will be 2 layers of carbon aramid with 3 layers for the sides and scoops.

these will be replacements for dominus and juggernaut and the 3rd yet to be named for the mrs team.
bots changed but the name remains (at least for dominus, unsure if my son will rename juggernaut) octane has changed from a 2wd flipper to a 4wd flipper made from 1mm polycarb although it may end up getting some carbon aramid treatment. still needs a bit of work cleaning it up but its funtional mantis has been stripped down and is going to be completely rebuilt, using 2 servo's for the grabber, some proper esc's (last were big, heavy and overkill at 40 amps) but should somewhat resemble the mantis you saw at aws)

sorry, no pics as its liturally just a pile of electronics currently

yes finally myself and my son has built a cluster... i wired up the electronics and let my son loose with some polycarb to build his and i built mine... both weigh 150g so im going to do a little trimming to bring them under weight for a safety net at the weigh in... mine is the one with wheels

so progress has been made on the spinner for the mrs... it has a hextronic bldc with turnigy plush esc... drive is coming from 2 servo's i have hacked, and boy are they fast... fast to the point that its probably the fastest bot in the collection...

weight of electronics, a single 1.5mm piece of polycarb, a 2mm aluminium motor mount and battery is 69g giving me a decent bit of weight for the weapon and armour... weapon is probably going to be a thick hardened steel collar with 2 screws that both mount it to the outrunner, and will be the weapon teeth... but thats subject to change... so 3 bodies down... obviously needs tidying up and wheel hole/weapon holes cut. but these are the basic bodies.
still waiting for them to fully cure before i start making holes i was not pleased with the carbon aramid...

its just not as solid as the standard carbon fibre i find...

i dont know whether its the aramid or the change of resin (west systems was used for the carbon fibre but changed to another brand for the aramid) but either way, polycarb is my friend...

i now have 4 4wd flipper/lifters

all follow a simmilar design but 2 were built to the specs of their respective pilots...

the mrs wanted covered wheels where as my son wanted slightly exposed wheels to he could control himself if he gets stuck on his side...

my mrs (being the big kid she accuses me of being) has been enjoying the "how to train your dragon" films, so i decided to make her bot look like the main dragon in the film... Toothless... the "breed" of this dragon is called a Night Fury... so this is the name of her bot.

2 of the 4wd pushers are mine and i stuck with the names Dominus and Octane and my son has kept the name Juggernaut for his.

the servo's have been upgraded from the mg90s's in most of the bots to some metal geared 2.6kg 0.8second servo's... the speed remains about the same as what i had before but the power is far greater.

Oooh yes this is a thing I would very much like to know!
Shame about the Carbon Aramid - the forms you'd created looked really really good!
Jiggy Sawdust
Jammin' Good with Weird and Flippy
The Pushbot from Mars
Top

You have to provide a link which finishes in a image format, so for example...

Be aware, some places don't allow hotlinking directly to images like this. With that said... 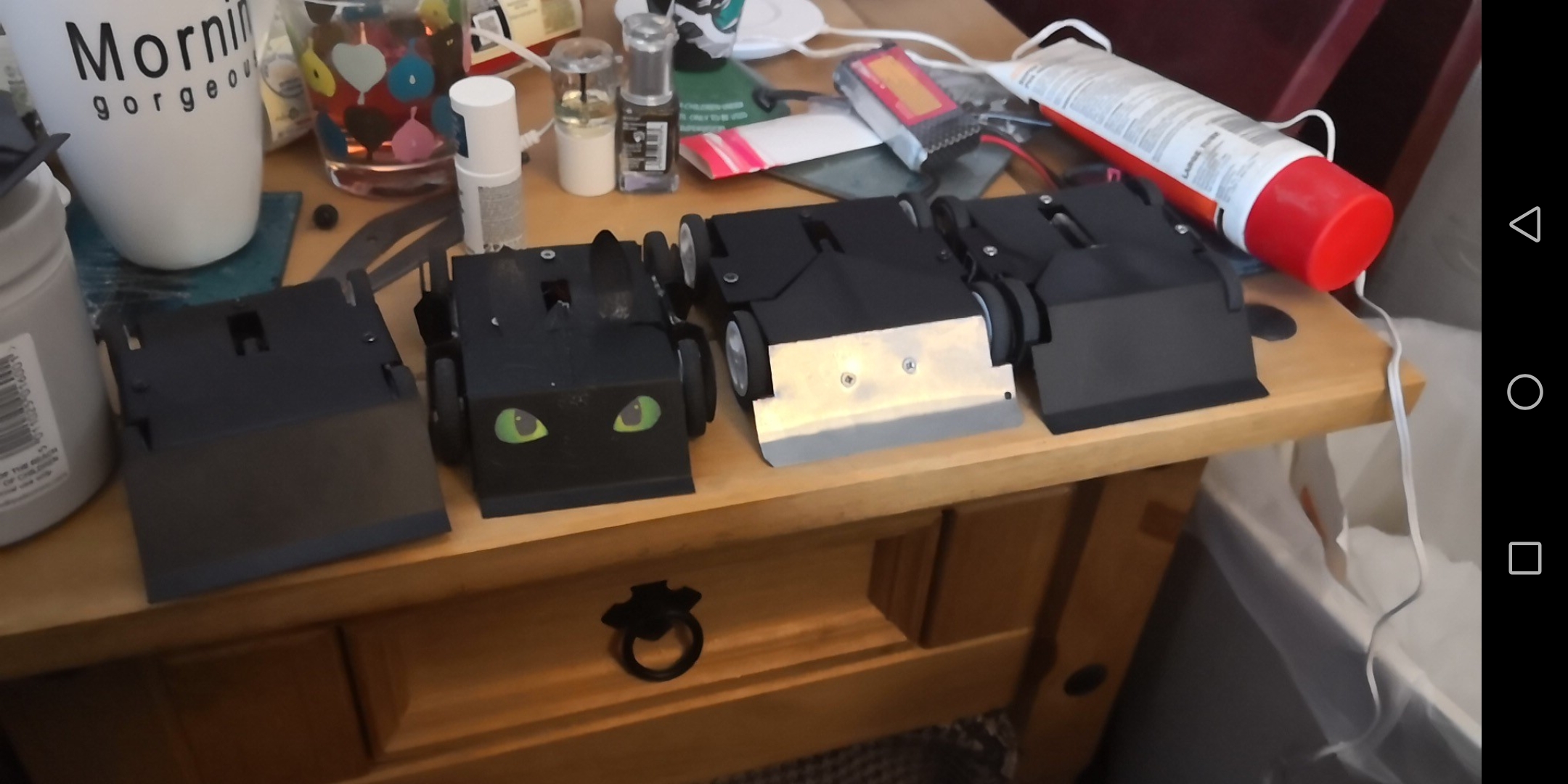 thanks for clearing that up for me, it has been something that's been bugging me for a while...

a simple .jpg was all that was stopping me...

it does not look pretty, but its functional and thats all that matters...

it can also be paired up with one of my antweight cluster botlets if i so choose as they all weigh less than 75g...


heres some pics of "Flea the scene" and next to an ant