So in case it wasn't obvious by my inactivity, I've been busy with real life things. As a result of this, my bots have STILL not been touched, modified, or properly repaired since AWS58!
Okay. So. Today was AWS60. What. A. Day.

Due to numbers, Pushbot sat this one out, and Jiggy and Jammin' took point to fight for Team Lima. Jiggy was hoping (somewhat ambitiously) to best his 4-2 personal best, and Jammin' was hoping to beat his PB of 1-2.

First fight: Jiggy vs Not The Face. The moment I saw Not The Face, I suspected it would go badly. A) My driving was rusty, and B) Not The Face was tall. Tall, and with no nice flat top to grab. Trying to maneuver around Not The Face it was my driving that let me down though, as Jiggy understeered and flopped into a pit. Good start.

Jiggy's next fight was against Team Phytes Little Sytes. A cluster. Jiggy usually wins (when it wins) by Kamikaze. How the HECK was I meant to fight a cluster???
I avoided grabs initially and just tried to be behind one of the clusterbots, and stay weavy and figure of eighty enough that they couldn't gang up on me. I actually managed to get under one a few times, but wasn't able to push it out before it wriggled free. After what felt like MINUTES (but was probably seconds) I DID IT I herded one of the Sytes out! After that it was Jiggy at his finest, grabbing the remaining Syte (on his second try) and dumping it into a pit somehow without following it in. JIGGY BEAT A CLUSTER!

3rd fight was against Tick-Tock, a horizontal grabber. I felt good about this fight, as Tick Tock isn't particularly hard to get underneath, and is also a nice 2WD design to get grabbed by Jiggy. The fight was quick, and decisive. Jiggy grabbed Tick Tock, and drove into the pit. Kamikaze win, but a win none the less.

4th fight was against Junk in the Trunk. I felt good about this fight too - nice, flat topped 2WD pusher. Perfect Jiggy food.
Yeeaahh... that wedge is crazy hard to either get around or under. I just couldn't catch a break!
Jiggy did get to demonstrate that it CAN SELF RIGHT! and can also still move (ish) when on it's side, and even self right if it finds something to bounce off (in this case Junk). Needless to say, ot was a one sided fight and Jiggy was out. 2-2 though, and with that fight with Team Phyte? A solid showing!

Jammin' was the star of the show though.

So Jammin' had never fought a Spinner. It's first fight was against Plank Of Wood - does that count?
Either or, Plank Of Wood vs Wedge ends with Plank being carefully bounced into the pit. Easy enough.

Fight 2 was against FlippAnt. Firstly - FlippAnt is blue again! That makes me weirdly happy. Secondly - what a fight! I wanna re-watch it. It was fairly apparent Jammin' was faster, and I was trying to out-drive Peter, but just couldn't quite get the angle. Peter got a good grab on me (you can hear me going "nononononononono!" in the stream / I imagine in the eventual vid) but I was somehow able to wriggle free. I then flipped FlippAnt out over one of the walled pits! HAHA! Jammin' had beaten his PB!

Fight 3 was against Kharuul, except it's been renamed... Something drop of sunshine? (EDIT The Fursuit of Happyness)
The fight was pretty even. Not-Kharuul was getting under my wedge, but I could get his sides. I was keeping away from anything too dangerous, but it wasn't looking great. That said, I only needed to flip Kharuul and it woulda been mine pretty much, as Kharuul's wedge would've been rendered useless.
Kharuul then drove in the pit. I didn't want to win like that! 3-0 now though!

Fight 4 was against Esper. Ho boi. Luke and I have fought many times before at small, friendly events / at his house. My win record against Esper is... low. I have beaten Esper, but not nearly as many times as Esper has beaten me.
It became apparent pretty quickly that I COULD GET UNDER ESPER! Trying to out-drive Luke though is no easy feat!
It was a pretty close back-and-forth fight, and I really feel like I nearly had him! But nerves got the better of me and my hand just froze and did not do what I wanted it to when we were josteling near the pit and I drive straight off.
Luke then turned to me and said "I don't want to win like that!", echoing what I'd said the previous fight. Karma, huh?

Fight 5 was against RBMK. Welp, this is it. Jammin' is about to fight a spinner. Here goes!
I was slow out the gate - I know I'm not great at straight lines. I didn't want to risk a box rush.
I tentatively tried pushing RBMK a few times (and have the scars to show for it). I realised I could however, and started trying to get a flip!
Somwhow, I managed. I nearly even flipped RBMK out! Instead, with RBMK floundering upside down, I pushed him out. My cheer and insane laughter might have blown some eardrums!
THE DAMAGE THOUGH
...was less than I'd expected! It took a hammer to flatten the flipper back out, but the recycled "mystery" steel held up well! Annoyingly, I had also lost one of the ears, and Jammin' needs those to self right. I was called back into the arena before I could gluegun on a hasty replacement.

Fight 6 was against Bolt. This is the fight that I couldn't remember, and still can't. I look forwards to the vid so I can convince myself it did actually happen. I seem to recall my thoughts were mostly on Jammin' still needing some repairs. (this paragraph was inserted as an edit after Antlog updated and I was able to look up the fight I knew I had forgotten)

Fight 7 was Jammin' vs Ant Ratchet. I was still in shock from the RBMK fight, but HAHA HERE WE GO
Ant Ratchet was IMMEDIATELY on top. Like, it was clear I wasn't gonna win this.
I dunno what happened. I was cornered. Ant Ratchet was flipping me over the corner wall. Then... I was behind Ant Ratchet flipping Ant Ratchet over the wall? Bwuh? I... Won???

Fight 8 was Jammin' vs Life and Death. Now that is a NASTY spinner.
I box rushed. Why. WHy did I box rush. Jammin' doesn't have the speed to box rush! (Note to self - I want faster N20s)
There was one glancing blow (So thankfully no damage), and the momentum span Jammin' straight into the pit. Thus ended my run.

Please, correct me if I've got any of this wrong btw. I feel as though I've missed a fight? (Yup,i totally had. Bolt.) The day is kinda some mad, high-adrenaline, cookie-fueled blur, so it might take the release of the vid for me to be able to make sense of it!

I won't talk about the rumbles, as I only took part in one, and didn't do much except flip people that landed in the pits back into the arena once I was out. Actually wait, should I own up to that?

This has been by far my best outing to date, and I cannot wait until the next one!
Last edited by LimaHotel on Sat Dec 07, 2019 10:38 pm, edited 1 time in total.
Jiggy Sawdust
Jammin' Good with Weird and Flippy
The Pushbot from Mars
Top

(BTW Nightwish and ABSuede, you both owe Jiggy a whiteboard) :p
Jiggy Sawdust
Jammin' Good with Weird and Flippy
The Pushbot from Mars
Top

you did incredible, and it was so great to see you there, even though i don't agree with your... dubious build and battery safety practices
team A12 / BANANAPHONE

Oh, pictures! So I didn't take any yesterday, but I've taken some now off the minor damage sustained by Jammin'. 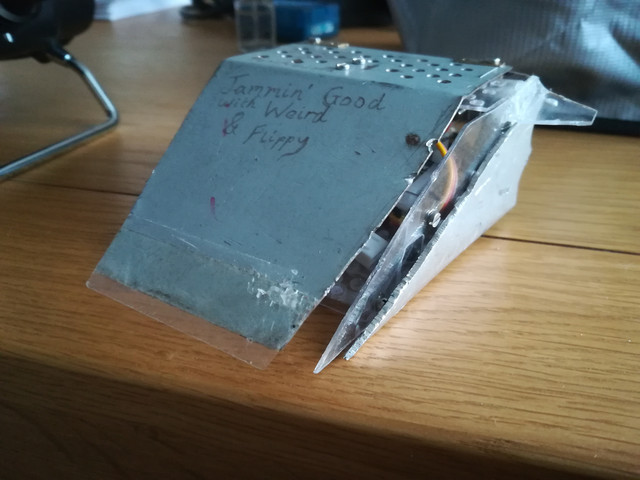 And showing the scuffs to the 7075 and the hastily gluegunned on replacement ear: 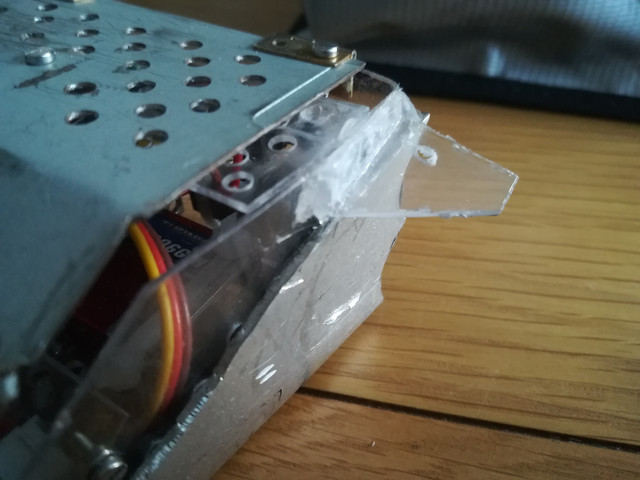 Not bad for facing off against (and beating!) RBMK!
Jiggy Sawdust
Jammin' Good with Weird and Flippy
The Pushbot from Mars
Top

please pick up your complimentary scissors and hot glue gun on your way to the "cut first then make it" work bench...

anyone seen using a computer or even a pencil will receive a life long ban, and be redirected down the 3dprinted hall of shame, and into the C.A.Ding room of failed prints to reflect on your decisions in life...
Team Rocket
Esper(4wd flipper)
Mantis (4wd grab 'n' lift)
Dominus (Vert SPINNAAH)
Breakout(modular cluster)
Remembering Rex (antweight cassius)
Fennec (4wd flea) former world champion
Top

AAH Antlog updated! And I can now see what the fight I'd totally forgotten happened was!

I fought Bolt! Which I believe is a shakeybot? Honestly I don't remember that fight AT ALL. I remember there being another fight, but I couldn't remember who it was against. Apparently, Jammin' beat Bolt before fighting Ant Ratchet and after fighting RBMK. Huh.

Oh, also this is how close RBMK came to beating me. 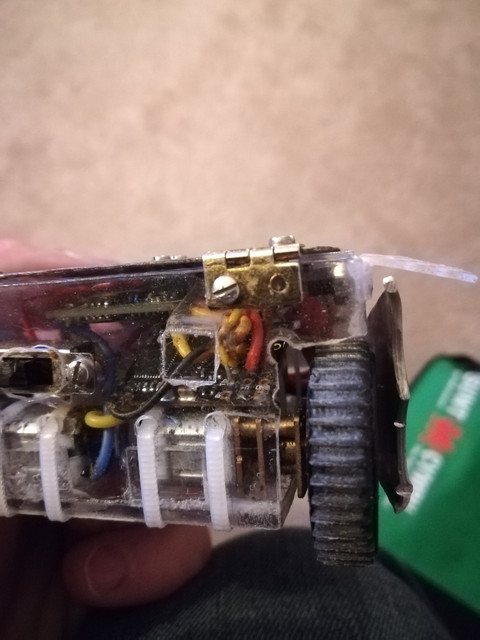 Those are hits from behind. Literally millimeters closer and they would both have hit the wheel. I had some serious luck onside that day!

Also, upon inspection of Jiggy, I think I know why I couldn't get under Junk. The m2 nut on the tail had spam slightly loose, allowing the tail some rotation. This meant that when accelerating, the wedgelet on the front of Jiggy wasn't kept flush with the ground. I'm not saying I would've won had I noticed that prior to the fight, but I definitely would've fancied my chances a Nats more!
Jiggy Sawdust
Jammin' Good with Weird and Flippy
The Pushbot from Mars
Top

Oh, and an update regarding future build plans:

I've decided I won't do v2 of any bots. If they get trashed or otherwise retired, well... There are plenty of lines left in the song!

(Pushbot doesn't count as I'm not happy with that build yet, so these aren't new versions, they're just prototypes)

In terms of bots I do wanna be working on though?
He Span It Left Hand (SPINNAH)
But Threw It Too Far (Front Hinge? 4 Bar? One of them)

Oh, and I need some kind of a pun for the next line of Ziggy Stardust as well: "Became a special man". Ideas welcome :p
Last edited by LimaHotel on Sat Dec 07, 2019 10:50 pm, edited 2 times in total.
Jiggy Sawdust
Jammin' Good with Weird and Flippy
The Pushbot from Mars
Top
Post Reply
107 posts