Much as the batman aesthetic was kinda deliberate, It was more just to do something with the wings rather than leave them boring and triangular (and shave off some weight :p)
Namewise I would like it to be something from The Rise And Fall, or Bowie at the very least.
Current name ideas:
Flip 'em by Smiling
Suffragette Flippy
Jammin' Good with Weird and Flippy 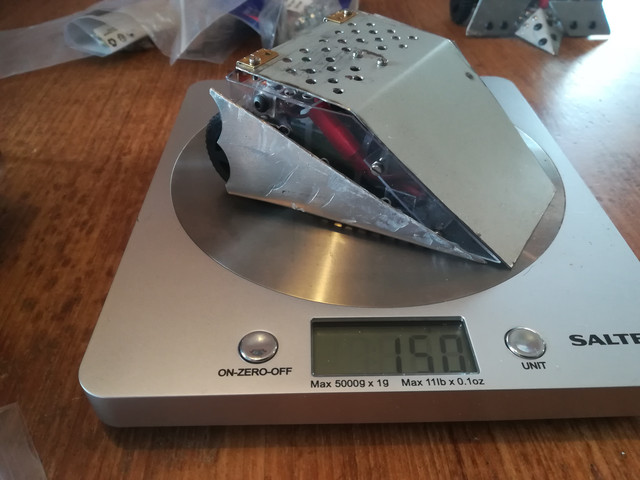 https://youtu.be/Puv3ApCWWDw
Last edited by LimaHotel on Wed May 01, 2019 10:07 pm, edited 1 time in total.
Jiggy Sawdust
Jammin' Good with Weird and Flippy
The Pushbot from Mars
Top

So I was working on Pushbot, and I slipped with the hacksaw.
Wear gloves kids!
Cut to the bone, but thankfully no damage done.
Right. So Pushbot may not get finished as soon as I'd hoped.
Jiggy Sawdust
Jammin' Good with Weird and Flippy
The Pushbot from Mars
Top

I had a great time at robot club 2 - such a relaxed event! On the whole I'm really happy with how both Jiggy and Jammin' Good performed - Jammin' had the most problems. Drive kept cutting out for some reason, it wasn't often, but happened. And I'm not sure why. Both bots encountered self righting issues - Jiggy is too slow to self right (and also REALLY struggled with the bouncy arena floor) and Jammin' Good gets stuck on it's side. Jammin' Good should be easy enough to fix, Jiggy I'm not so sure about. I might see if I can get a greater degree of motion on the sawblades? If they lift further that should in theory help the self righting.
Oh, and I was REALLY impressed with Peter's MilitAnt, the rubber band flipper. I'm looking forwards to seeing the video of the event - there were some great fights!
Jiggy Sawdust
Jammin' Good with Weird and Flippy
The Pushbot from Mars
Top

Okay, so. Finally got around to making the changes to my bots that should hopefully fix the flaws that were highlighted during Robot Club.
Jiggy self rights better from his back, but still doesn't from his side. I'm prototyping some behemoth-esque wings that might do it, but I doubt I'll get the new build with them on done in time for the Rugby aws.
Flippy now has ears? Wings? Little bits on his head that let him self right from his side. They were easy and I can't believe I didn't get around to doing that until now.
Pushbot drives now and is nearly done - the right wheel guard still needs attaching and I'm gonna add some forks to the back so I can still push when inverted.
My brother has made progress on Fling Mustachio as well and by god does that KingMax servo have a good flip!
I'll see you all at Rugby!
Jiggy Sawdust
Jammin' Good with Weird and Flippy
The Pushbot from Mars
Top

So I have a team for Rugby! 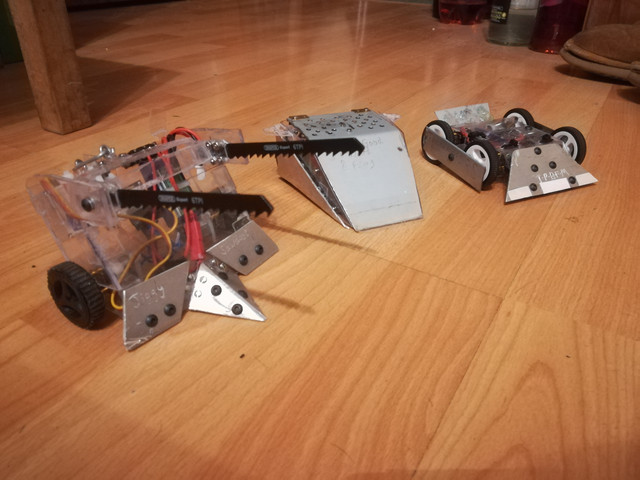 Pushbot weighs in at the lowest, with 5g to spare
https://youtu.be/QCR_ogGJrC0 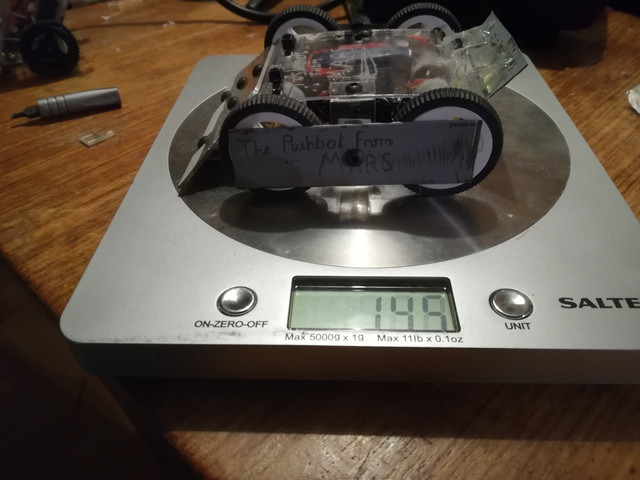 Now to get practicing with them! I need my brother to finish refining Fling Mustachio (which he has registered and is bringing with him to the Rugby AWS) so I can have a fight partner!
Jiggy Sawdust
Jammin' Good with Weird and Flippy
The Pushbot from Mars
Top 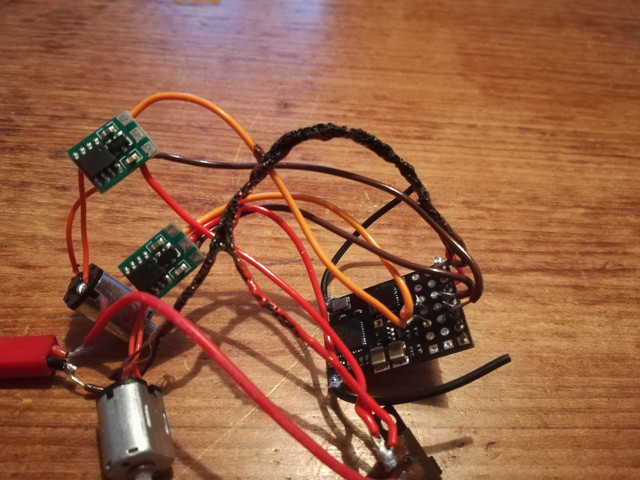 *siiiigh*
That worked fine earlier. Then it caught fire. I have no idea why.
EDIT I found the short. The positive wire on the Lemon apparently broke loose and touched the ground. I guess that lipo is now dead. At the rate I'm going through lipos these days I need to order some backup

Not the best place for this perhaps, but my brother has yet to grab an account for these forums. His first bot is ready for AWS!
May I present Fling Mustachio! This is also decent test footage of the KingMax servo I tested, as it's in this bot! 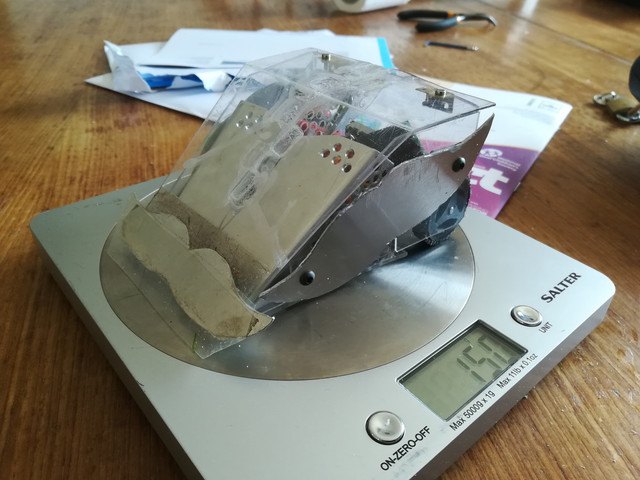 Okay, so it's been a while since I've posted here... Oops.
So aws 58 was FUN. I had a great time, and did okay! I went 1:2 with Jammin Good, 2:2 with Jiggy Sawdust, and 2:2 with The Pushbot From Mars. Somewhat annoyingly my brother set the bar a touch higher by going 3:2 with Fling Mustachio!
There were great fights, and I've dropped a comment on the aws video with links to all my and my brother's fights.

So anyway. Going into Roboshowdown yesterday, I knew the result I had to beat. I had Jiggy (unchanged, still sporting my bodged repair from after it's fight with Trigger at aws), Jammin' Good (totally unchanged), and Pushbot (total rebuild that I did in about 4 hours on Friday before setting off).

The event started with the 2v2s. I had planned to enter with my brother, Sam, but sadly he was ill and unable to join me. T_Y had planned to enter with his brother, but due to receiver issues he couldn't get any of his bots to work on his other tx. So he insisted his brother enter the 2v2s, and I partnered up with him. We were team "Grabbers that can't self-right"!
So Jiggy and Working As Intended.
We went 2:2, amazingly! It was a good bit of warm up for the 1v1 main competition. Fun was had.

1v1s.
I entered all 3 bots and at the start of round 4 I was worried. Jammin' had gone 1:2 (again) and was out. Pushbot had gone 2:2 (again) and was out. Jiggy was 2:1 and I honestly thought my brother was gonna hold the house record for a while longer! I mean, Jiggy is (on paper) my least competative bot. It's hard to drive, has fairly naff ground clearance, is horrendously unstable, and is NOT the best at self-righting.
Jiggy won it's next 2 fights! 4:2! Hahahaha!

After the 1v1s, we had some whiteboards and rumbles. I was pretty quickly eliminated from the Grabber Rumble by AWG Crimpet (though I took him with me), and I was thrown out of the rumble very quickly as well. Oh well.

The BOSSFIGHTS THOUGH
Pushbot survived both bossfights, and I like to think played at least some role in winning them! They were great fun though. Beetles are COOL.

And thus ended another great day. I look forwards to whichever one I can make next!
Jiggy Sawdust
Jammin' Good with Weird and Flippy
The Pushbot from Mars
Top
Post Reply
107 posts