Hi all, sorry for the radio silence over the past month or so. It turns out my Dad's soldering iron didn't work and I haven't had time to get a new one yet, so building has obviously ground to a halt.

In addition to that I found out about a month ago that I have to resit one of my exams in December, which is obviously disappointing. Passing that's a massive priority so I haven't had and won't have a lot of free time between now and then, so building's going to take a back seat for the rest of the year. If AWS56 does take place in October I'm unlikely to make it.

On the positive side, thanks to a helpful guy on Facebook I've discovered that I can download Fusion 360 for free as a hobbyist. So I've downloaded it and will spend what little free time I have learning how to use it, and will hopefully be able to 3D print some robots late this year/early next. And I'll still be planning builds/ asking questions about parts and feedback on designs.

Until then!
Michael - Team MG Robotics

It's been almost nine months since I last posted, sadly I was very busy finishing my exams in the second half of last year. I've just been too busy to do anything robot related at all, but now that I've passed them all at long last I've finally had some time to design and plan some builds. Here are five antweights that I’ve designed on paper and built a scale model in cardboard. I now just need to design them on CAD.

Apologies for the links as opposed to actual pictures, unfortunately the forum isn't letting me post any photos atm no matter how much I resize the photos. Please let me know if there are any issues.

The first robot is a four wheel invertible pusher called ArmamAnt! I’m going to add some spikes on the back so while it’s upside down they can be used as a makeshift wedge. The name is a tribute to the legend that is Jonathan Pearce and there will be a sticker of him on the top for added amusement! There’s not really a lot more to say about the design because I’ve kept it simple so my first build isn’t too complicated, although in the last week I’ve decided to make the top panel a front hinged flipper to give it another string to its bow. That will be a later change and it’ll run as a pusher at first although I’m designing the robot with that upgrade in mind.

The second will be a flipper called MicroNewton. I started working on this last year but abandoned it after I realised I needed to learn CAD design to complete it. The design hasn’t changed over the past year, but now that I’ve found some smaller wheels I might make it a bit narrower.

The third will be an invertible horizontal bar spinner called Vespula Robotica. I got the idea from a wasp which flew into my room one day and noticed its buzzing sounded like a death hum! The name is a play on the name Vespula Vulgaris, the name of the common wasp, and it’ll have a yellow and black paint job. I’ve tried to make it different from other horizontal spinners by adding curved sides so it should roll back onto its wheels and I’ve tried to add a “spinner killer” wedge on the back although I was limited by size restrictions.

The fourth is a vertical spinner called SNAFU (Situation Normal; Antweights Flying Upwards). This is a refined design from some feedback I got last year; it was a rectangular box but I’ve slanted the sides to try and deflect spinners better, and also to make it smaller so I can put more weight into the weapon. The wheels will stick out of the back so it can run both ways up and it’ll have an interchangeable disc/blade depending on its opponent.

The fifth and final robot is going to be a hammer bot. I haven’t come up with a name for it yet so if anyone has any suggestions I’m all ears! I’ve designed the body to be as small as possible so I can make the hammer as big and as heavy as possible. Basically I’ve designed it to be entertaining rather than competitive, so ideally I’d like the name to fit this mindset like a pun on a celebrity name (Donald Thump would’ve been perfect but that’s obviously already taken). I’ve given it a wedge to deflect spinners and the rear prongs are there to try and give the ability to push others around if the hammer turns out to be completely useless.

Any feedback is most welcome!
Michael - Team MG Robotics

You embed the images using bb code - you can usually generate it from the hosting site. I host on imgbb.com, though I know others use other sites.
As to your beautiful CAD (cardboard aided design), the majority of them look like solid design ideas! All proven concepts.
General advice is not to attempt a spinner as your first bot.
As to your specific designs, one thing I will say is your vertical spinner could use some forwards outriggers. I can see you've got those little tusks, but I'm not sure they give you enough of a stable footprint to throw your opponent up instead of you down. Look at the outriggers on Shakey's Test Robot Please Ignore to see what I mean.
Also, wo said you need to cad (computer or cardboard) anything???
All my bots I've just sat down and done - I've had to make a lot of sub-optimal design choices to make them work (look at Jiggy's tail bracket to make it fit in the box) but I find the organic building process to be fun!
Jiggy Sawdust
Jammin' Good with Weird and Flippy
The Pushbot from Mars
Top

Yes, I'm definitely not building a spinner as my first antweight. The first one is going to be Armamant! as it's by far the simplest one to do.
I think I know what you're getting at, I'll give SNAFU a little redesign...
Admittedly yes, I don't have to use CAD to make my robots. But having tried last year to make MicroNewton out of polycarbonate it came out really badly so I'd rather use CAD and then 3D print the chassis as it'll come out much neater. That's just my personal preference as I'm sadly not very adept at drilling holes in the right place...
Michael - Team MG Robotics

Oh, looking back over this whilst trying to find some excuse to not be sleeping, you mentioned wanting to find a better way to hinge your flipper? How has that gone?
I personally use hinges to hinge my flipper. Uncreative, sure, but they work. I honestly just use the smallest hinges I could find in the local hardware store. They came with little holes for some little nails, so I drilled the holes out to 2mm and I use m2 nuts and bolts to secure them. Well, eventually. I did my first aws with them just glued using superglue and gluegun.
On Jiggy, I've hinged the grabber by just having 2 bits of polycarb bolted together and secured with an m3 nyloc nut and spaced apart with an m3 washer.
I know Kyro attaches all his flippers directly to the servo horn and then builds lateral support into his general robot design.
Jiggy Sawdust
Jammin' Good with Weird and Flippy
The Pushbot from Mars
Top

i do indeed... although i have also used the servo as one hinge and polycarb as the other hinge which means it has better support before adding some into the chassis I was tempted by the idea of using hinges Lima, but all the ones I found were too heavy. Where do you get yours from and how heavy are they?

Having had a look at other flippers what I've decided to do for ArmamAnt! is make a thin bar as in the photo, and then I'm going to design two separate "p" shaped attachments and slot them over the thin bits at the end. The top panel/flipper will be attached to the tops of the "p"s. Design is still a work in progress, depends on how it works I might do something similar for my other antweight flippers.

As for how to attach the servo arm to the flipper to open and close it, I'm still working on that. I'm attending the BBB event on the 16th June and I'm going to talk to people there and see what I can learn from them.
Michael - Team MG Robotics

That bit you have made there. At least double the thickness of it

it will need to be stronger if it hinges the flipper.
(^ Says the guy who used M1 screws in his first bot!

Will do! Like I said it's early days...
But the concept itself is sound enough?
Michael - Team MG Robotics 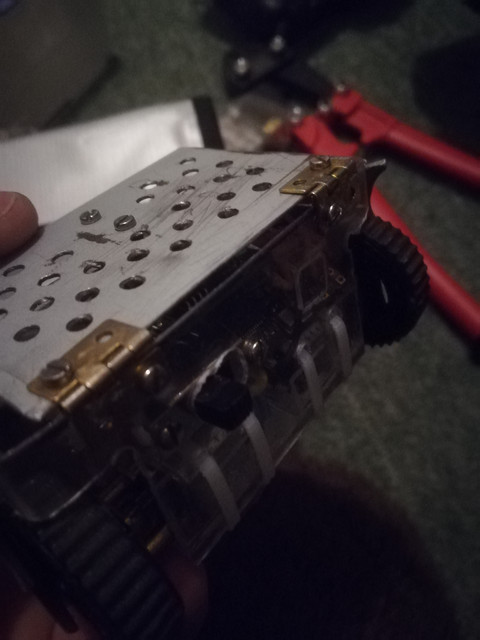 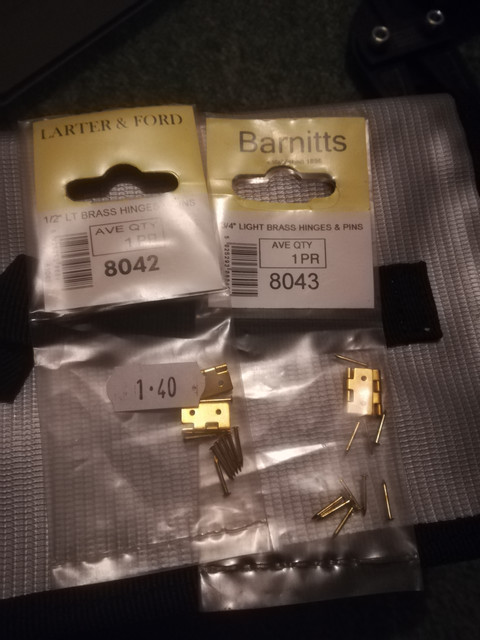 So here you can see the hinges I use (some bought from barnitts, others from a small hardware store. Amusingly one claims to be 3/4" and one 1/2", though they're the same size?) (edit: just measured. They're DEFINITELY 1/2".)
Either or, they're light enough that they don't register on my admittedly not great scales, and they've held up absolutely fine under my usage. You'll notice I've only secured one hole on each - that's because otherwise the nuts interfere with each other and it can't move closed. By offsetting the nuts (m2 and I did need to drill out the nail holes to 2mm to take the m2 bolts) it retains full movement.
As to your bar hinge - I believe T_Y did something similar with his Hello World? I'm not sure about his other flippers. But yes, it's a functional method of hinging your flipper.
Good luck!
Last edited by LimaHotel on Mon May 20, 2019 1:19 pm, edited 1 time in total.
Jiggy Sawdust
Jammin' Good with Weird and Flippy
The Pushbot from Mars
Top
Post Reply
38 posts