Regardless of the wiring, the outer shell of your robot is amazing! If I can get mine to look that neat I'll be extremely pleased! I look forward to seeing it in action next week.
Michael - Team MG Robotics

So, quick update before AWS55.

I was planning on posting a video of Hello, World! working as intended, but I've already found a few flaws that will need to be addressed in the future. The first is that given enough stress, some of the screws will strip the holes in the 3D printed parts and come loose. The second is that the weapon motor can strip the hole in the actuator arm, causing it to no longer be able to flip anything due to lack of grip!

Luckily both of these can be temporarily addressed by printing off more components. So right now my printer is running overtime to get enough spares printed before I leave for Rugby tomorrow! Looking forward to taking part in my first ever event!
Thomas

So that was an amazing day, despite not winning anything! It was great meeting everyone and seeing their bots.

Hello, World!'s first fight was against Bzwroink and immediately got punted out of the arena! It's wedge was lower than mine and I got piggy-backed out. The second fight was against Spin-a-ma-thang (or was it thing, or thong?) - a horizontal spinner. I took a few hits to the front and lost the srimech when it rode up the wedge, but I think the impact jostled the internals a bit, so the switch half-flicked itself off- it was fine when I took it out of the arena. So the improvements to be made here are a more sturdy srimech and bolt/velcro down the switch.

Percussive Maintenance, on the other hand, needs a major revision (which I was already planning on before the event). It first went up against Anticyclone and managed to last for a while before being turned over. PM also lost it's second fight to being overturned against Harley's Hurling Horror. So the main thing the revision will aim to do is allow PM to self-right- that means a much stronger axe motor (how does 1200RPM @12V sound...). Im planning on taking the design for HW and make it taller to accommodate the axe mechanism. I plan on mounting the pivot point higher up on the bot, and I'm going to add some wings to the back to tip it over onto the flat top to hopefully self-right.

Let's see if I can get the redesigns finished for Robodojo mid July...

The faster the output speed is good for the axe but has lower torque so you would be better of with a relatively slow one for self righting.
Top

You have some very nice engineering in those robots. I am thoroughly impressed.

I suspect the poor result was being drawn against strong opponents. It seems that all of team Oink are strong pushers and have great drivers.
Robots: Betsie - RaspberryPi controlled flipper bot with gyro stablisation - too clever for her own good?
Stacie - tidy flipper; 4wd driven by hair bands
Top

was it tough having to fight two in a row? I'm not sure my nerves would've been up to that.

@peterwaller
Ah right, that makes sense. I wonder what a good RPM/gear ratio is for a good balance between self-righting and axe power. I've got a few 600RPM@12V motors lying around.

@MarkR
Thanks! Though personally I think there's still some problems. On Hello, World!, I had to quickly solder on some extra wire in the morning when I got there as one of the board connections had come off during transit! The wheels are also mounted ever so slightly off from each other (one is 1-2mm forward of the other) - though that doesn't seem to affect driving.

Driving is definitely something I need to improve, I'm still not used to how twitchy the bots are!

@voorsk
It surprised me at first when I heard Percussive Maintenance get called up right after Hello, World!, I guess that's just how the random draw chose it to be!
Thomas

So I've just got back from Robodojo which was great fun! It was awesome seeing some beetleweights go at each other as well as the antweight fights.

I only took Hello, World! along as Percussive Maintenance still needs redesigning. It's been a good learning experience and practice at driving.

The first fight was a rumble against High Density Wedge Bot and the ant version of Smash. I went straight for Smash, taking some damage. 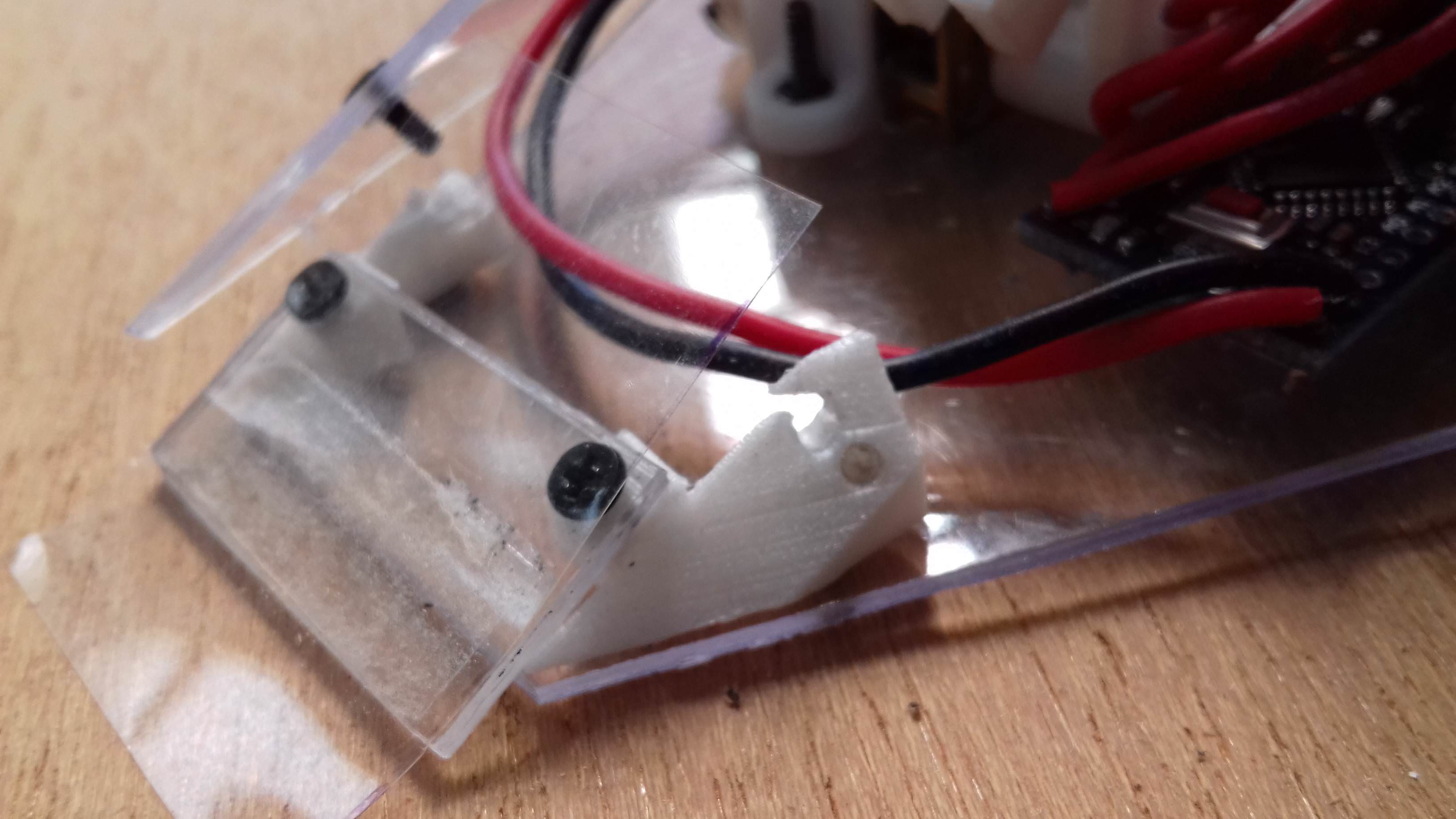 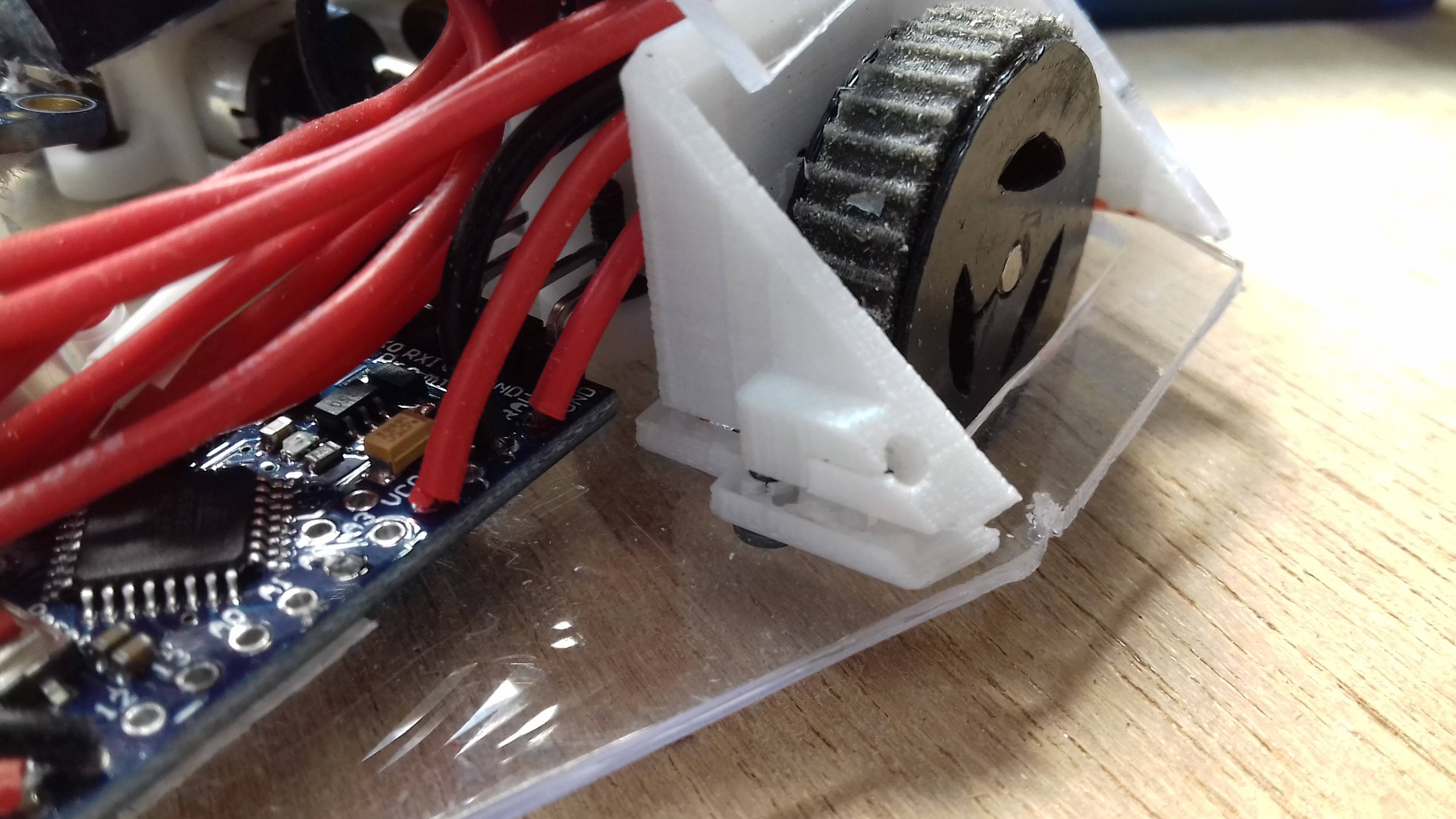 What had happened was the 3D prints failed, which caused the flipper to pop out. HDWB took Smash into the pit and then Hello, World! Well, I brought along spare brackets, so just replace them and then I'm back in.

The second fight was another rumble against Smash and Anticlockwise 2, a pretty powerful vertical spinner. Pretty much the same thing happened here, the 3D prints broke and de-laminated, resulting in this: 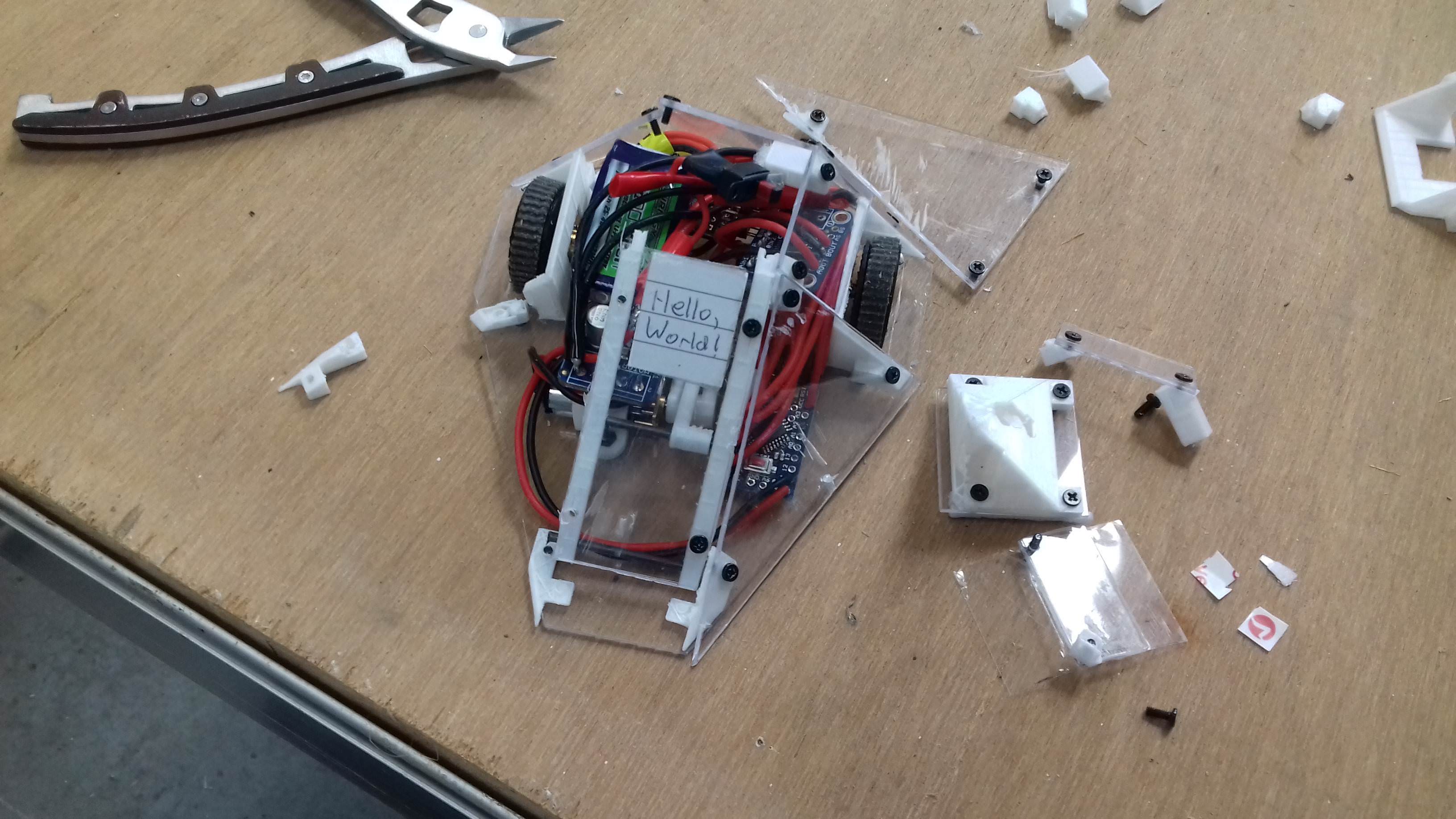 Aaaand now I'm out of spare brackets, I didn't print enough! So now I'm reduced to being a wedge bot held together with copious amounts of electrical tape! 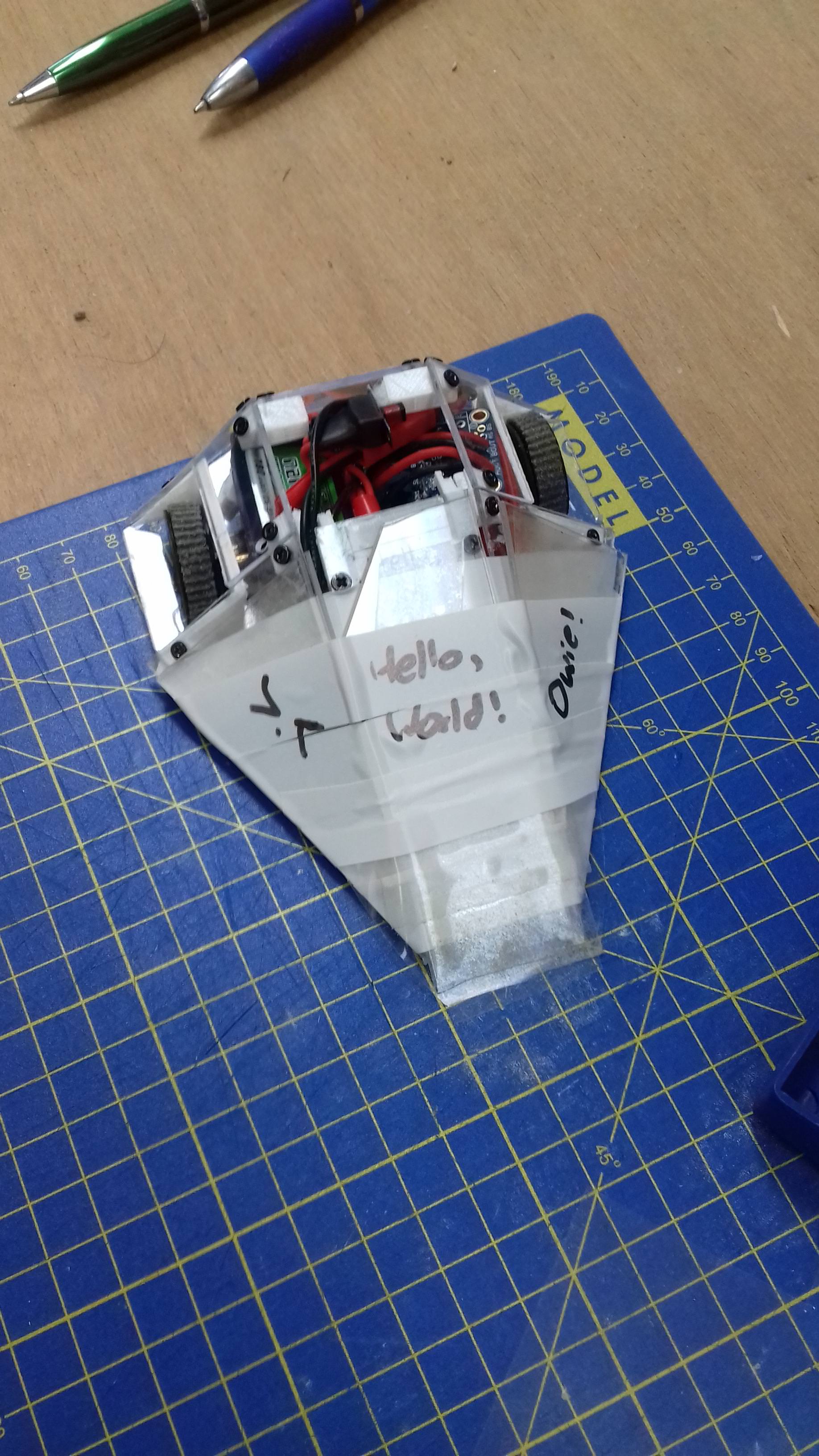 Next up was a 1v1 against Anticlockwise 2. The fight could have been over very quickly as I got overturned (and no long having my flipper, no srimech), but Anticlockwise flipped me back over. I still lost, though there were a few close calls where I nearly managed to push Anticlockwise out of the arena.

Rebuild again with the electrical tape wedge of dooooommm (now with added superglue!) for the final main fight with the ant version of Crackers. This was a good, long fight, and eventually I spun out into the pit (I need to sort out the reverse listing to one side!).

The damage looked quite bad, but really, it's just the shell, all the electronics still work fine so its not that much effort to replace/improve the shell.

We also had a balloon popping game where everyone attached a pin and a balloon to their bot and we all went into the beetleweight arena to see who could keep their balloon the longest - that was a nice addition to the day's events.

The takeaway from this is that I need to strengthen the 3D prints in Hello, World!, and probably Percussive Maintenance aswell. I was only printing with 20% infill density, to save weight, but obviously that has comprimised the integrity of the brackets. I need to also redesign the hinge on Hello, World! so that it is stronger. Good job I've got plenty of time to the next event!
Thomas

Well done on your tape repairs. I think you were always fixing something. Thanks for competing in the balloon game, but the two wins came as we had some acetite inside the straw, so it was held up. I certainly had fun, and had advice on the undercutter, which should be ready for aws 56.
Top

It's been a while since the last update. Gonna lay out my plans to prepare for AWS 56.

So, first things first, I still haven't repaired Hello, World! since Robodojo, so that's the first task. I'm happy with the deign, it just needs stronger brackets. So I'm gonna up the fill percentage and make them a bit bigger. If I can set up my 3D printer space to work with ABS that would also be a big help (need to design an enclosure for it).

Percussive Maintenance also needs a redesign. I'm planning on raising the pivot point of the spanner and driving it with a gear. Flattening the top should also make it easier to self right.

I've also been toying with an idea for a four bar lifter, along the design of Lucky or Bronco over in the US. It's not a design I've seen in UK antweights, so why not try it out. I'm tentatively naming this bot 'Have You Tried Turning It Off and On Again?'. Here is a sneak peek of the CAD work:

I think I'll prioritise Hello, World!'s repairs first, as there's not much work that I need to do to get it combat ready again. Not sure which one of the other two I'll work on after that...
Thomas