I've been printing off and cutting parts for Hello, World! Put the shell together and 'borrowed' electronics from Percussive Maintenance while I wait for the Arduino and co. to be delivered. I printed off a load of different length pieces to test out, this is the 'best' I've managed so far:

Observations I've had about this setup: I'm currently printing off more different shaped/length parts to fiddle around a bit more to see if I can get more power out of the flip. I'm also wondering if reducing the speed of the motor might make it more powerful?

Also, I managed to discharge a cell in one of my LiPos below 3V, which means it's basically dead now, right? How should I dispose of it?
Thomas

Hello World! looks absolutely gorgeous. I always wanted to build a front-hinge flipper (or a Lightning-esque side flipper) once I finished my other antweight (still have to do better soldering on it), and this is what I wanted it to look similar to!

The use of a motor to power the weapon is unusual though. I've seen it used for axes and the like. Not sure if it has the torque or lift than a good quality servo but I'm not an expert.
Top

Front hinged flippers are probably my favourite weapon (go Firestorm!). I do have a servo but it's larger and slower than a gear motor, and I had some spare gear motors lying around. To be fair, I just wanted to experiment a bit!
Thomas

The Arduino arrived, so I've been tinkering around with it over the weekend.

The code is based on Sparkfun's videos on RC control. I modified the code to work with my motor driver, which does not have a separate PWM channel to control speed for each motor, instead it accepts PWM directly on the input channels. I've also added a failsafe so that the motors stop turning if connection to the transmitter is lost (the built-in LED will light indicates a connection).

I still need to wire up the rudder channel to control another motor so I can power a motor-based weapon. Once that's done, I need to reduce the profile so that I can fit it inside a bot. I think I've made an error in this regard by soldering all of the pin headers, it's going to be difficult to remove them! It's probably easier to just get another set of components and hard-solder those instead of trying to de-solder everything seeing as the setup is cheap, might not arrive in time for AWS though.

A tip I figured out, when removing/desoldering multiple header pins ..
Carefully prise the plastic pin holder off first, then desolder and remove the pins individually.

After many hours of (re)soldering I finally managed to get all of the electronics into Hello, World! Weighs around 120g. 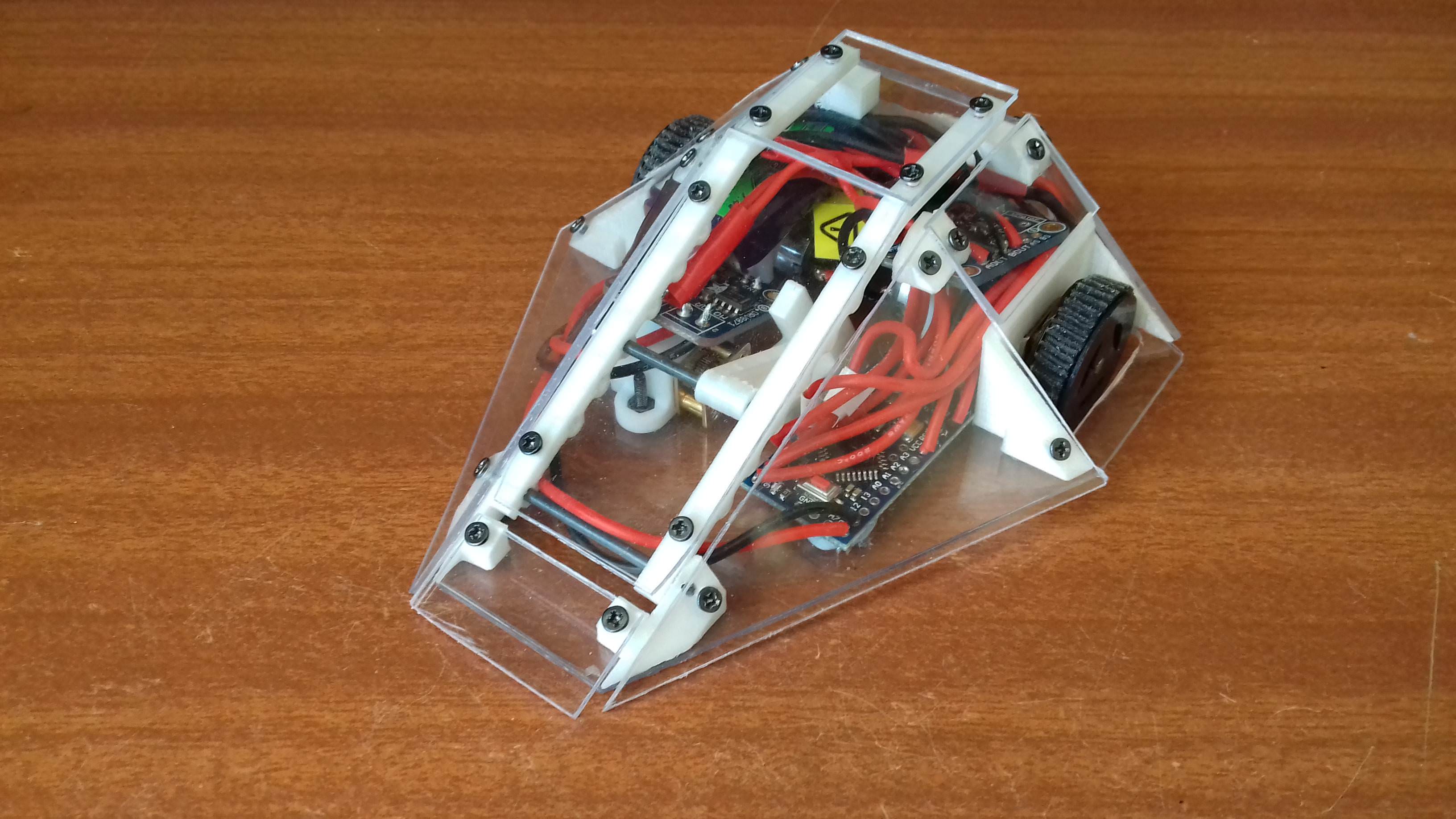 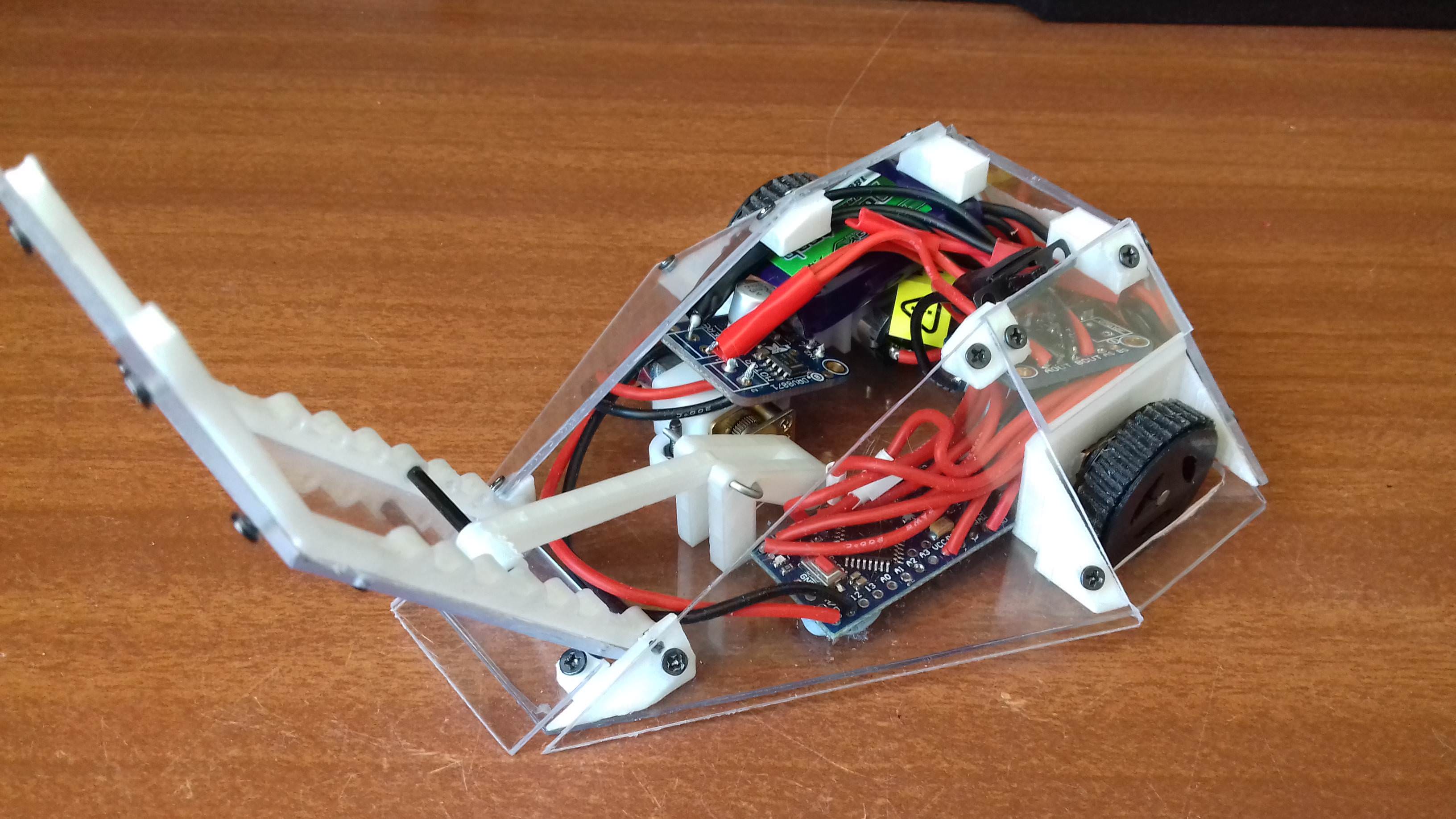 The components are temporarily held in place by blu-tack, I'll replace it with velcro before AWS.

My soldering and wiring leaves a lot to be desired. It doesn't help that I seem to have a knack of designing shapes that only JUST fit everything inside! The wiring is a mess because the white wire I bought had very thick insulation, so it didn't flex very well which would have meant even more difficulty getting everything in there. I've tried to remedy this by wrapping bits of white electrical tape around the wires that would have been white.

Gonna get to re-coding the Arduino after lunch, I had to move around a load of connections in order to get it to fit!
Thomas

Nice! Some fine packing, there.

That is a good looking robot and an amazing amount of wire crammed in.
I have had problems in the past getting all the wiring in which is why am experimenting with controller modules that though bigger than some reduce the need for external wiring by including the power, servo and motor connectors plus the power switch and in one case the motors.
This hopefully will not only decrease the overall volume and weight but also improve reliability.