Can confirm the power hungry nature of the servos - I managed to over-discharge a battery while testing. Very powerful though.
Thomas

that reminds me, i still don't have a charger that shows how much charge is in the battery - is that essential??
team A12 / BANANAPHONE

I usually measure it with a multimeter, I've got an apparatus I've hacked up which has a red LED and exposed terminals for easier metering (easier than trying to shove probe leads up the business end of a lipo pack)
Robots: Betsie - RaspberryPi controlled flipper bot with gyro stablisation - too clever for her own good?
Stacie - tidy flipper; 4wd driven by hair bands
Top

I use one of these https://hobbyking.com/en_us/battery-monitor-2-6s.html

It plugs into the balance lead and shows you the total charge, then the individual cells
Thomas

I've over-discharged nearly all my batteries and they're fine. That includes the "dead" ones you gave me btw Thomas :p
With bigger Lipos it's a real thing? But these 180mah 2s ones don't have enough stored energy to properly bang. I've done practically all the stupid with these batteries, and the worst I've had happen was hot and swollen, maybe a bit of smoke. I did have a fire once? But in retrospect I'm pretty sure it was caused by the short and not the lipo.
Jiggy Sawdust
Jammin' Good with Weird and Flippy
The Pushbot from Mars
Top

I think this event was the one I had the most fun at, despite not winning any fights.

HYTTIOAOA's first fight was against the infamous RBMK. I was actually looking forward to this fight, and feeling fairly confident. If my drive was working properly, I think I had a chance at corralling it into a pit. Alas, the low tolerances I had built into HYTTIOAOA's ground clearance meant that it was partially high-centred without raising the lifter, which deploys a small bit of 'caster' plastic to raise the nose. I tanked the first hits pretty well, until the lifting mechanism seemed to break. Eventually, I was pushed back against a wall, where I took a hit on a wheel which lost power, resulting in a count-out.

Inspecting the robot after the fight, I didn't actually take much damage. The broken lifter was simply that I had forgotten to replace a toothpick I had used as a pivot for the linkage during testing... doh! The wheel hub was toast, but somehow all the O-ring tires survived! Another plus, the motor still worked, it had just unplugged itself from being pulled a bit on impact. So with those minor repairs done, it was ready for the next fight.

I got some nice battle scars on the wedge, which HYTTIOAOA will wear proudly! 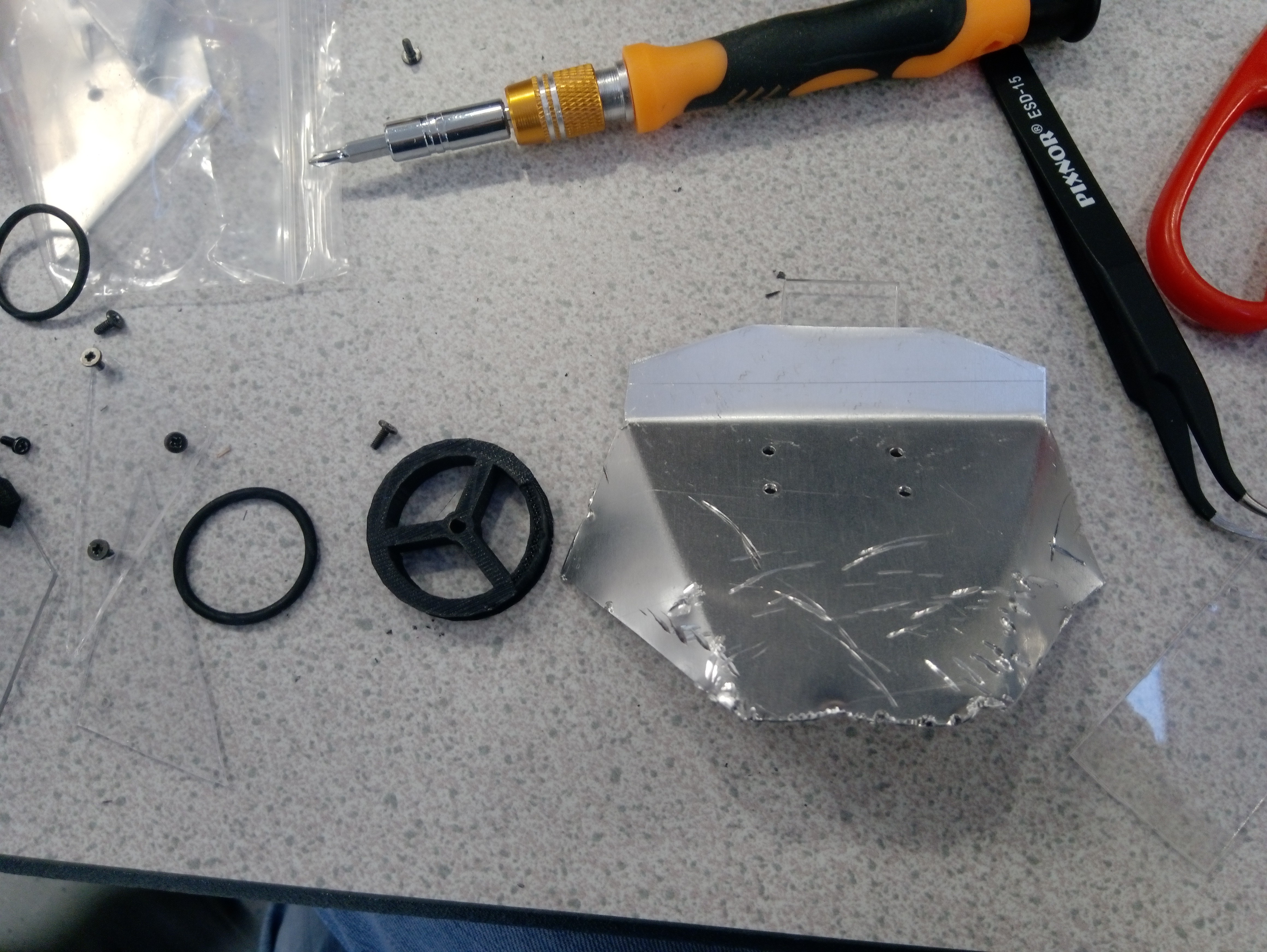 The second fight was against Push Comes to Shove, a 4WD parallelogram pusher. I had spent some time getting the front of the default lifter low to the ground and it helped, as we were getting under each other about the same. Unfortunately, he was the better driver and I ended up in the pit.

To be honest, I don't remember much about PM2's fights. I think the first was against a flipper (sorry, I forgot its name) and tossed me about until I ended up in a pit, and the second I was pitted by Angory Track. Nothing much to write home about.

Glow in the dark tape supplied by the EOs was attached to the hammer... and only the hammer XD. The LemonRX and AWESC did have their own LEDs though, so I could keep track of where PM2 was during the rumble. I had noticed that Hyper Velocity Star and Cosmic Burgervan were in this, so I decided to try to ram my face repeatedly into their weapons to see what happened. And... 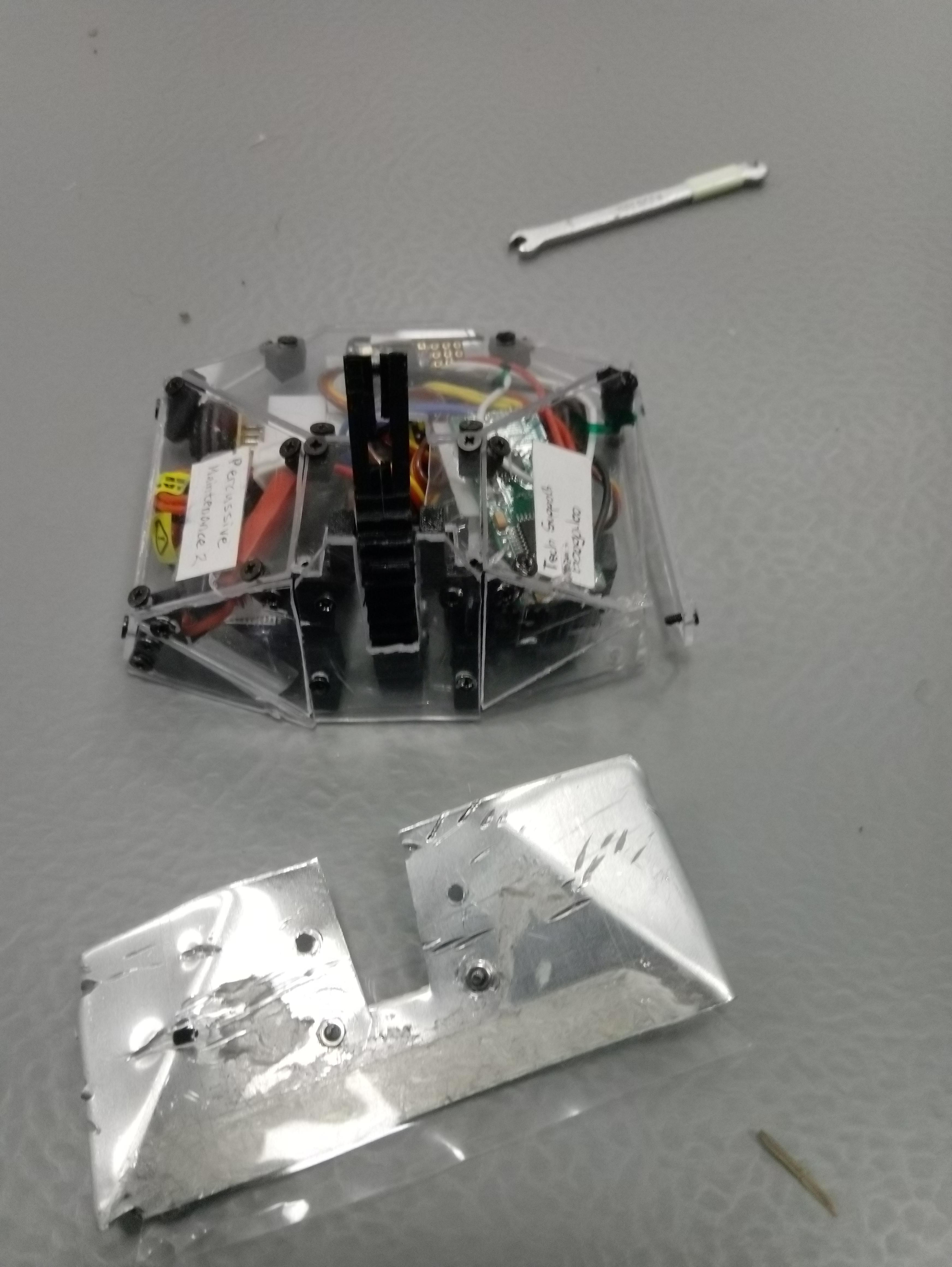 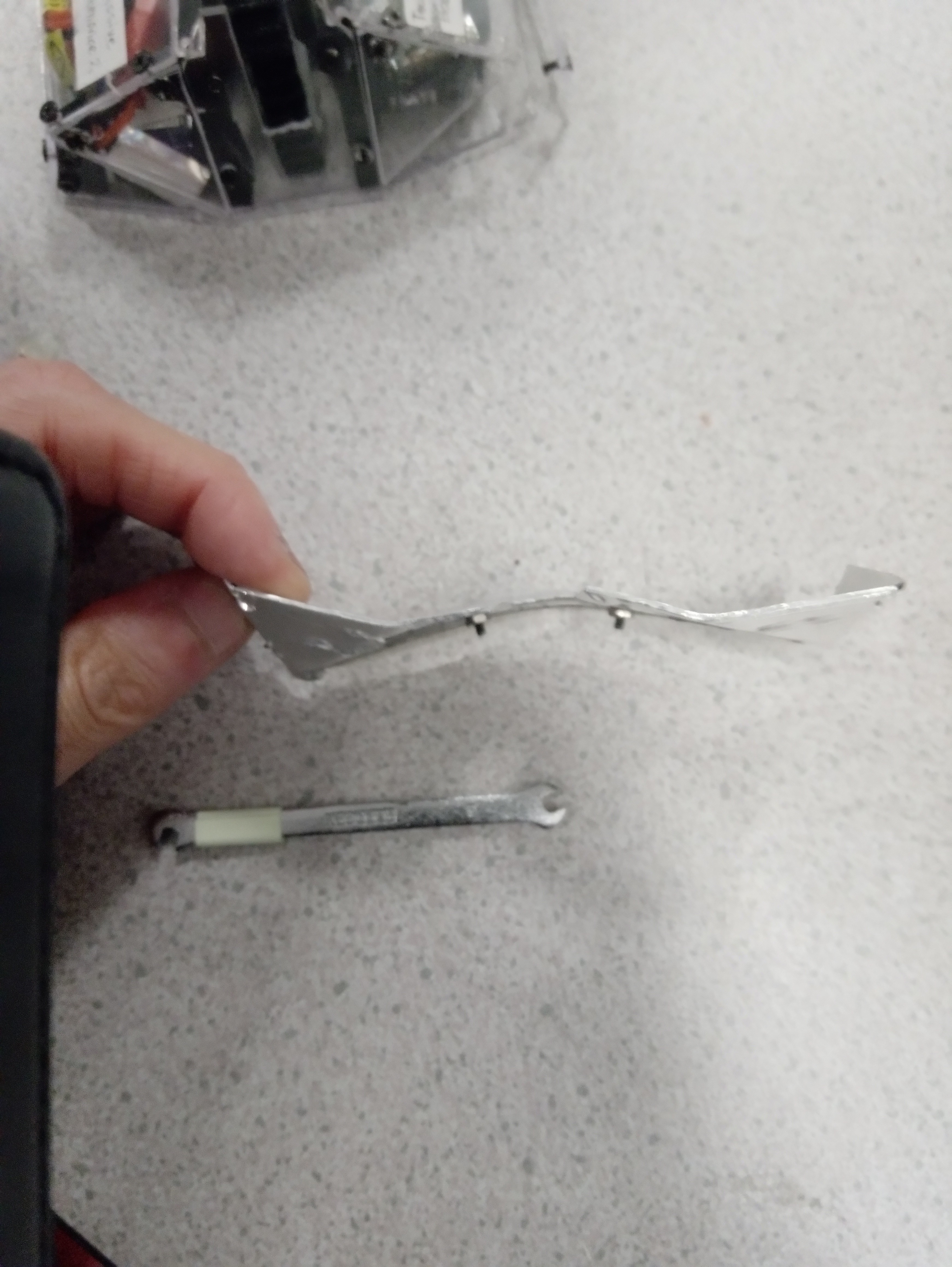 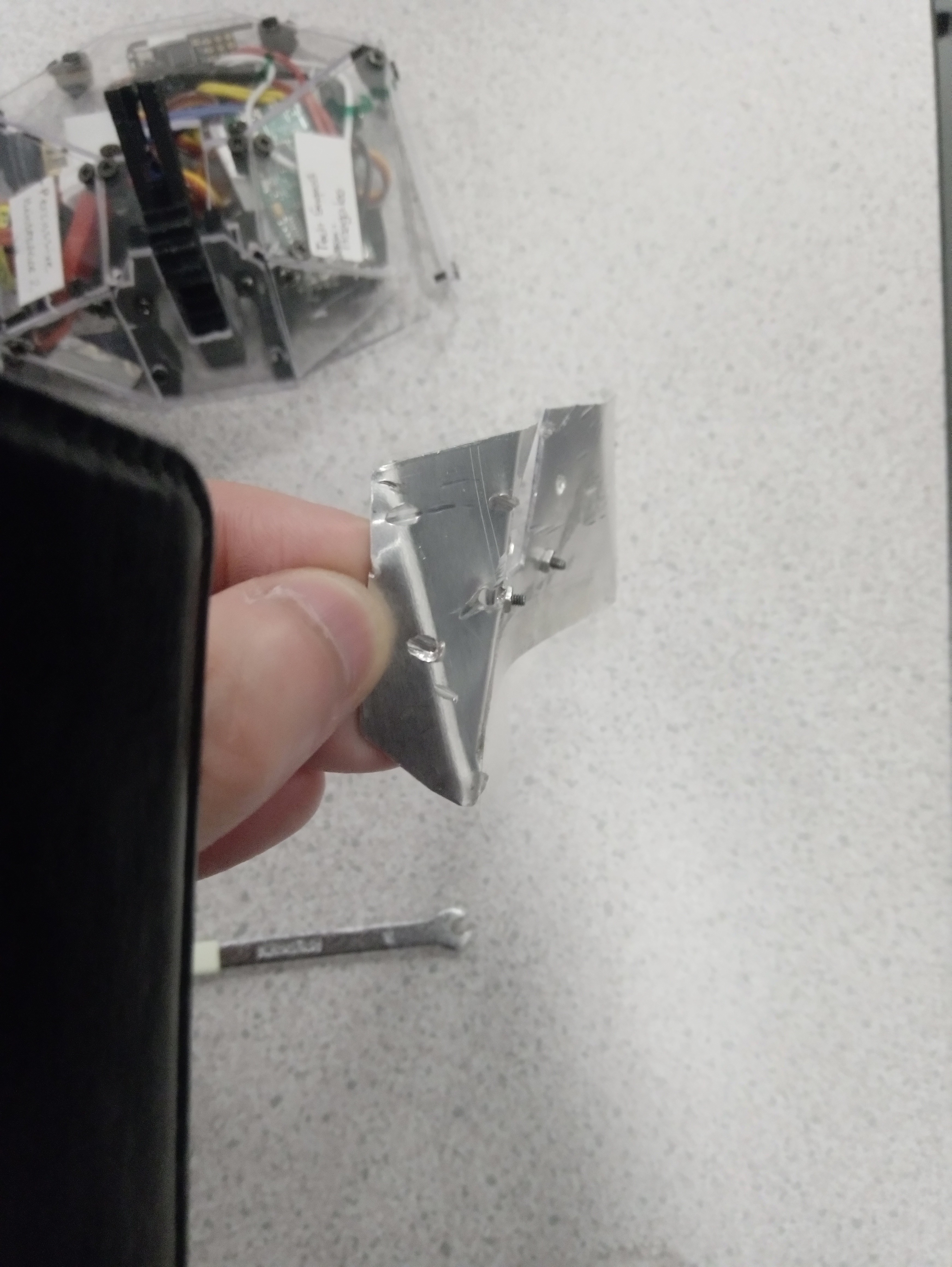 Wow, that was something! I actually managed to last the full three minutes, even getting Cosmic Burgervan into the pit! Repeatedly ramming HVS seems has caved in the 1mm aluminium shield, which I think was about 10mm caved in, going by eye. Cosmic Burgervan did the final blow, taking off the shield, and I think my attack that took it out also took off my spanner weapon. I only discovered this after the fight, at which point I burst out laughing enough to bring tears to my eyes! After I had dealt with Cosmic Burgervan, it was back to ramming HVS, which tore off some front panels and chipped the top left edge. Amazingly, all the electronics still work fine! 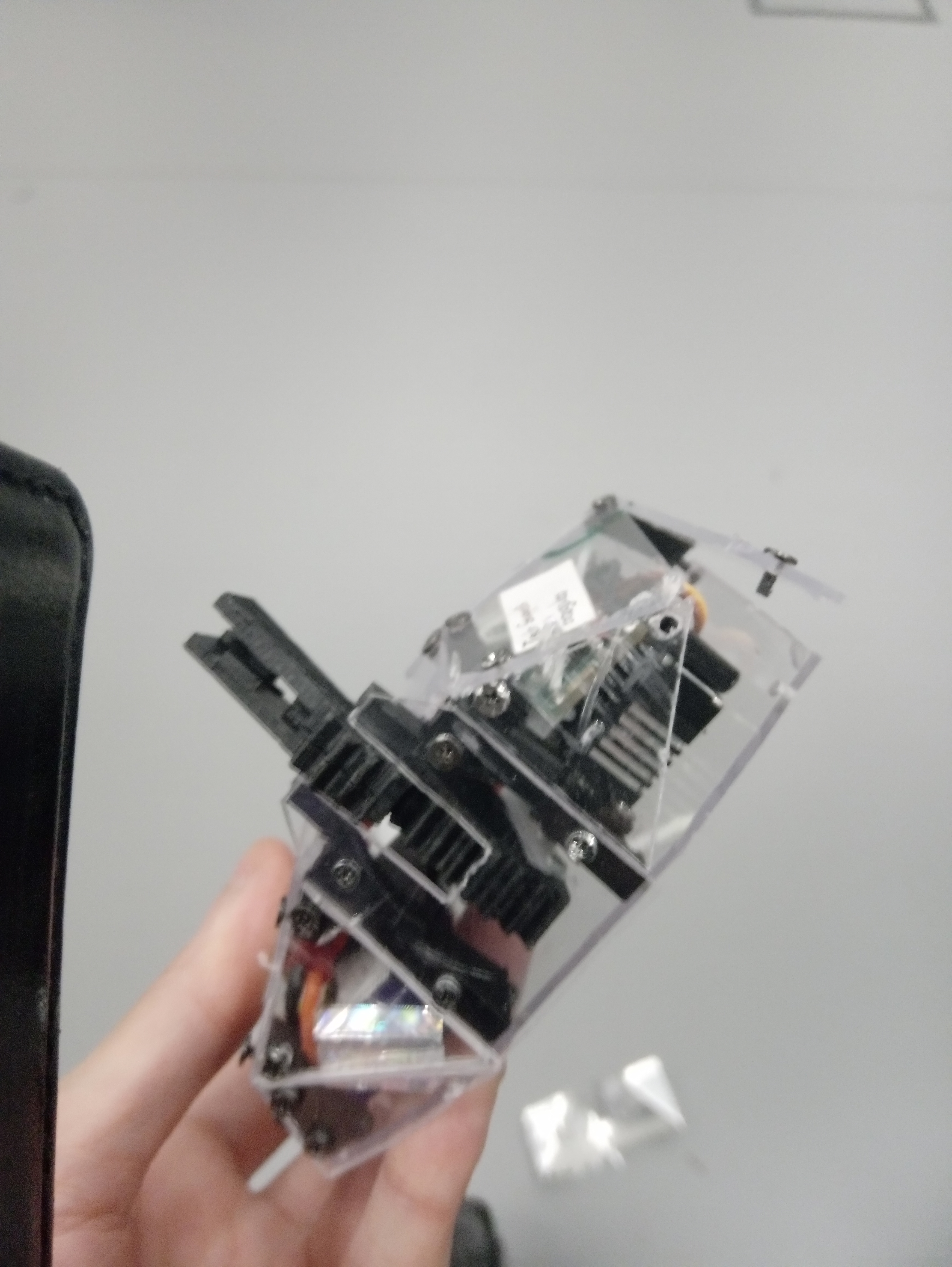 Overall, I'm very happy with how well the armour holds against spinners now on these bots. I think PM2 will be redesigned slightly to make the front armour panel a single piece, this should help reduce the potential bite points for a spinner if the shield gets removed again. I think I'll also make the shield fixed as opposed to hinged, just to make it a sturdier attachment. I'll also make HYTTIOAOA's wheels a bit bigger, to increase the ground clearance at the back of the robot to help with uneven floors.

I'm hoping to make it to Ant Freeze 7, the plan is to make the repairs to PM2 and HYTTIOAOA, then focus on getting Error 404 working. I already have an idea on what I want to do to make life easier for me with regards to wiring.
Thomas

*grumble* at least you HAVE scars to show from fighting RBMK! All I got is a couple of little nicks!

In seriousness though Thomas, you need to start making bots that do as good as they look! :p
Move away from printing those silly brackets! Bend your own from Polycarb! Polycarb doesn't delaminate *touches nose knowingly*

It was great to see you there man, and I look forwards to the day we get drawn against eachother!
Jiggy Sawdust
Jammin' Good with Weird and Flippy
The Pushbot from Mars
Top

Hey, it's not MY fault Thomas' bots always get trashed and there isn't enough of them left to enter a whiteboard :p
Jiggy Sawdust
Jammin' Good with Weird and Flippy
The Pushbot from Mars
Top
Post Reply
190 posts