Yo! Hi!
I've been milling around here for a while - my first intentions of doing this date back to April!
However, now I be here. I still have no... concrete... plans, but I do have some rather fluffy ones, and some very real components.
Lets start with what I have: The components.
5x LemonRX DSM2 6-channel w End pins
3x DasMikro 2s6a (I know the last batch had a tendency to combust, but I'm really hoping this batch are slightly more reliable?)
1x Devo7e - I need to mod it to do the DSM2 thing, though I believe that's "easy"?
20x N20 gearmotors
2x "pink" servos (S306G-HV)
A load of 2s Lipos, 2 charging bags, and a charger, though I still need to find a 12v power supply to cannibalise for it.
A load of a4 sheets of Polycarb in 0.5, 1 and 1.5mm
A sheet of 7075 aluminium, 1.5mm
A load of 2 and 3mm nuts and bolts
OH RIGHT and a NanoTwo.

Obvious things I'm missing: Wheels (I'd like to source or make my own rather than turn to the ToughHubs. I'm thinking Lego wheels? Maybe?), Wiring (I'm thinking 23 gauge?), and switches (simple amazon search should do it).

I also have some jigsaw blades and some old keys, and they'll (hopefully) make sense in a bit.

Now for the fluffier things I have:

Jiggy Sawdust and the Wedgebot from Mars:
So I wanted a grabber. I wanted (at the time) a team of ants all of which used an unmodified tool as their weapon. I've dropped the team tool idea, but Jiggy stuck around.
Similar to a rear-hinged flipper in design, the servo will operate as many jigsaw blades as I have weight for for grabbing. Because I wanted the full Bowie reference, and because each team can have a Cluster, I also hope to make enough weight for a basic wedgebot. From mars.

Key Grip:
So I've done some work in the film game, and will hopefully be doing more work over the next few years.
One of the departments is the Grip department. The HoD of said department being the Key Grip.
So an antweight that uses a key to grip it's opponent?
... Ahem. Yeah. Basically Key Grip is gonna be Jiggy's bigger brother.

I have pictures etc, but the attach file feature doesn't seem to support photos, and I've yet to set up some kinda online hosting thingy to link em with.

Suzan:
Right. Suzan is the least thought out. By which I mean the pronunciation of the name is all I've come up with. The bot won't be called Suzan - I want the name to be a.... one of those word thingies where each letter is an initial for a longer name... an Acronym! Yes, one of them. But I don't have one yet.
I also want not-Suzan to be a Flippah. Front hinged, rear hinged, 4-bar... I'm easy in that regard. What's more important to me is settling on whatever ridiculously over-complicated launch system it's gonna use. I'm leaning towards springs or elastics rather than pneumatics. I know they're a pretty terrible idea in any weight category and that's why there aren't any (Only examples I can think of are the famously unsuccessful Diotoir and the horribly disappointing ABC S2 Lockjaw) BUT just like the flywheel flipper (Warrior Dragon), terrible designs do hold a certain appeal. So I haven't given up on making little not-Suzan yet.

So yeah, that's where I stand right now. Over the next few weeks, I hope to successfully complete at least ONE of these. And HOPEFULLY I'll be seeing some of you at the AWS in February!

(Seriously, what's the most popular way of getting pictures on here?)
Last edited by LimaHotel on Mon Apr 29, 2019 9:03 am, edited 1 time in total.
Jiggy Sawdust
Jammin' Good with Weird and Flippy
The Pushbot from Mars
Top

I like the robot ideas and the themed names.

Couple bits from your post I can answer - yeah the dsm2 thing on the Devo 7e is easy. There is a step by step guide around, iirc it was on Nuts and Bolts website for people buying the older escs that were dsm2.

And for hosting images I just use https://imgbb.com. it's free and doesn't even need an account registering

Cheers Derek - I'll be sure to check that out when I have pictures to post!
Uuuh, an update. My plan had been to spend this weekend finalising the cad, and hopefully making a cardboard prototype of Jiggy. Unfortunately I'm not sure where this weekend went, but it seemed busy.
As it stands, the only real progress I've made is I can charge Lipos now. Oh, and I have added electrical wire to my large supply of jewelry wire, so that will undoubtedly help with the whole... electrickery thing. And switches. The switches are ENORMOUS for some reason, but I'm sure they'll be fiiiiine. It's not like they weigh anything. I'm also busy this weekend coming, so...
I dunno. Maybe I'll find an evening to do some Sketchup, and maybe I'll find one to do some building. I might actually skip the sketchup - I have components and plenty of cardboard and rough sketches. I might just skip straight to messing around with fit here in the real world.
I also need to actually look up how to LemonRX, DasMikro, etc. I have no doubt I'll understand it - this ain't my first electrickery - but it is my first RC.
I still have EVERY intention of attending the February AWS!
Jiggy Sawdust
Jammin' Good with Weird and Flippy
The Pushbot from Mars
Top

Hahaaaaa! I've finally done something!
Went to see a friend, and together we actually sat down and worked out this whole pesky knowing what we're doing thing. Huge thanks to T_Y for help with the mixing on the Devo7e!
Uuuh, so right now I have all the wiring done for Jiggy, though no shell made, I've redesigned key grip to be more of a flipper with the keys above kinda like the horns on... Uuuh... Termite something? The blue antweight that's great at picking up opponents on it's flipper and pinning then against the horns it has above. In my case those will be keys, but the idea is the same.
What I've actually built is a 4wd pushbot- and it does theoretically fully work fine! I'll upload pictures once I'm home and hopefully once it has wheels. Fun fact : silicon sealant does not a good tyre make.
I reeeaaaally want to avoid the toughhubs / anything 3d printed. I know it would just be BETTER, but I just wanna source my own wheels somehow and I'm running out of ideas.
ANYWAY yes! Things have happened! I have a robot that works! I'll be coming to the AWS! WOOO!


Oh, the pink servos BTW. What degree of motion are you meant to get from them? Plugged straight into the rudder pins on my lemon, I'm getting less than 90 degree movement and it's sitting neutral in a really annoying place, though that's easily fixed by just unscrewing the arm and fixing it in the neutral orientation I want. Is it possible to do any degree of customising with the devo on that, or is it just trims / offsets?
Jiggy Sawdust
Jammin' Good with Weird and Flippy
The Pushbot from Mars
Top

never used a devo, but look for a setting called end points... make sure its on your rudder channel and see if you have any extra you can give it... my tx came with end points set to 100 but i can push it to 120 in both directions... if its a mechanical restriction (the servos wont physically move beyond where they stop when manually rotating them (not really advised to do too often as it can damage the servo)) then you might want to remove the mechanical stop... this is usually a plastic block on one of the gears which can usually be removed with a sharp knife... if its a metal one, a file works in most cases...

hopefully you find something useful...

Yo, so I've dug out the old rubble sack of Lego (I promise there WILL be pictures of things!) and my plan had been to just epoxy lego wheels straight onto the n20 axles, though I'm no realising that would be a terrible idea.
I do have access to a 3d printer (Not a clue what it prints in - probably just PLA) - does anyone know where I might find existing designs ready to print that would accept a Lego 30.4 x 14 VR tyre?
(One of these https://www.google.com/imgres?imgurl=ht ... t=c&ictx=1 )
Cheers guys
Jiggy Sawdust
Jammin' Good with Weird and Flippy
The Pushbot from Mars
Top

The Pushbot from Mars!
A little unrefined, works though. No idea what it weighs - need to buy some scales.
Wheels are blutacked on, but surprisingly solid. Still need a more permanent solution. 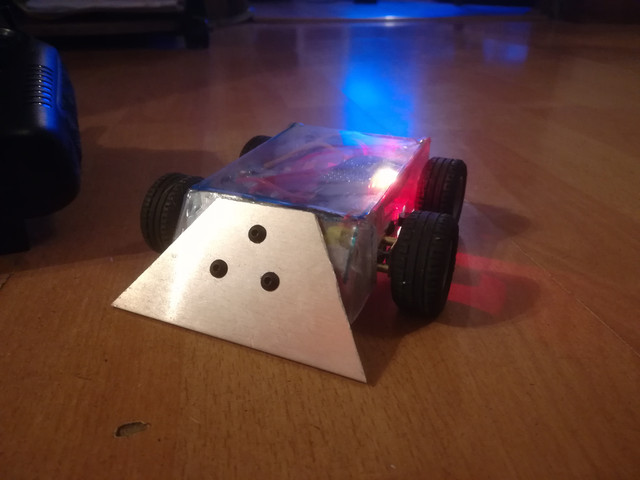 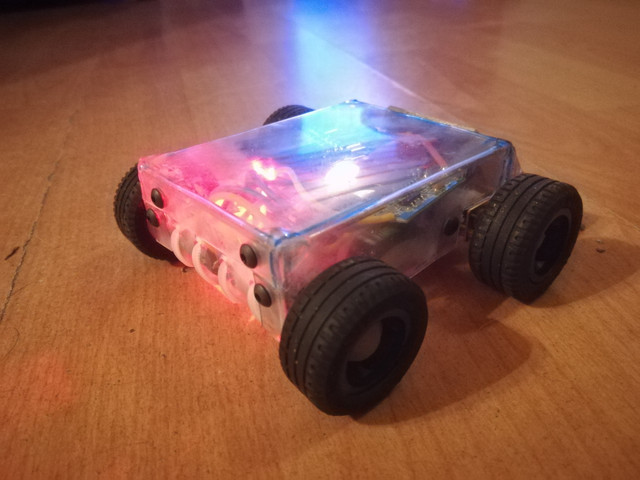 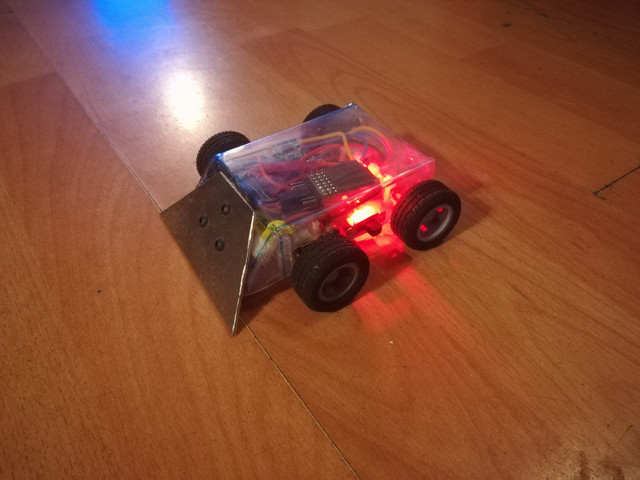 Also, if I'm right then there should be enough weight to add a self-righter, possibly make the wedge a flipper. If not, it's riding VERY high. What I should do is make another shell where the motors are mounted higher up. That way it should be invertible.
Either or, this was mostly just getting the learning out of the way. I now know what things do! Building shall shortly commence on Jiggy.
Uuuuh... So that 3d printer I mentioned btw. Can't access it. Not in time. So for the here and now... I might end up just using the epoxy. If I oil the shafts or have a layer of clingfilm, it should let me remove the shafts from the epoxy. Then to get a friction fit... I dunno. If it needs anything then... Layer of tape?
It's an idea. I'm open to any people have right now!
Casualties of War thus far btw? 1x motor gearbox, and god knows how many nuts&bolts. Fun!
Last edited by LimaHotel on Sun Apr 07, 2019 11:05 pm, edited 1 time in total.
Jiggy Sawdust
Jammin' Good with Weird and Flippy
The Pushbot from Mars
Top

Brain is built for Jiggy - thanks for suggesting looking for end points. The devo didn't have anything there, but in mixing I found scale and turned it up to 125. Clean 90degree motion accomplished!
Jiggy Sawdust
Jammin' Good with Weird and Flippy
The Pushbot from Mars
Top 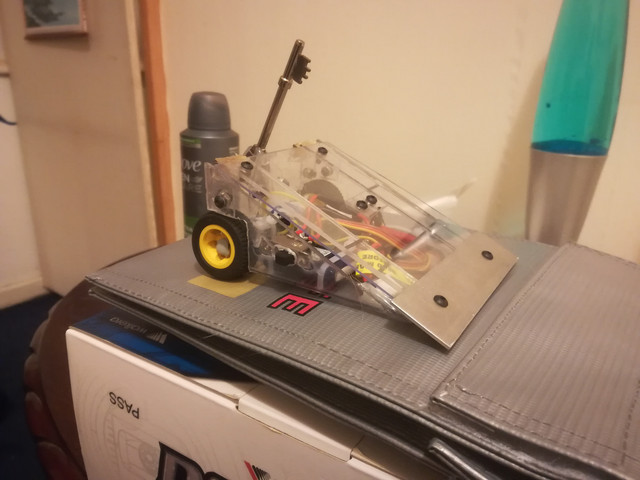 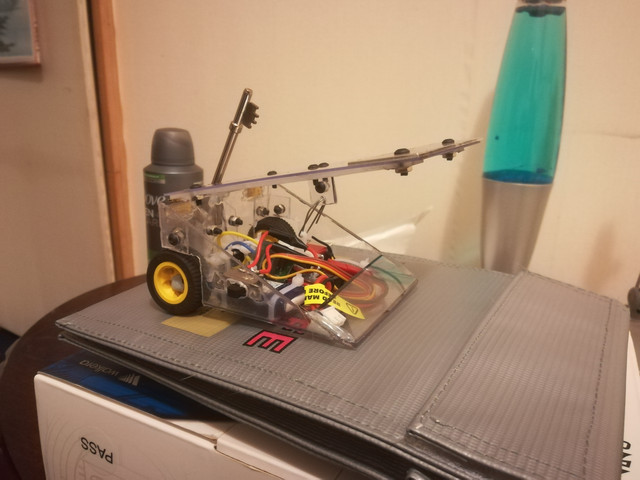 Key Grip!
Uuunfortunately he's kinda overweight. 7g with no wheels. The key is 12... I think I may need to lose the key tomorrow morning after getting to the event. There's also plenty of room for drilling holes in polycarb, and the 7075 titanium on the bottom of the flipper isn't needed per se.

I have 2 of 3 machines ready in time for aws tomorrow! Now to get some sleep before setting off at 5am...

Oh, I've given up on the wheels for now. Bought some toughhubs off shakey and I'll get them off him tomorrow at the event. Shame - I do want to use these Lego wheels. I think I'll need to design an entire hub to print though. Ho hum.
Last edited by LimaHotel on Sun Apr 07, 2019 11:06 pm, edited 1 time in total.
Jiggy Sawdust
Jammin' Good with Weird and Flippy
The Pushbot from Mars
Top
Post Reply
107 posts