sounds pretty cool! Hope it's not suddenly gonna become a theme, as I'm making a Lucky (not a bronco - i prefer Lucky's lifter motion)

there's a few ways of doing the mechanism, and mine is on caterpillar tracks, so hopefully they won't be too similar. Mine's called Black Carrot, in keeping with my gone-off-food naming convention (altho it makes me think of pirates)

@voorsk
I'm going for 4WD, I've got a NanoTwo that will do nicely in that bot. I need to work out the specifics of the mechanism for the lifting arm first! Hammer/axebots are good! Like 4 bar lifters and front hinged flippers, they're not too common in antweights.

I've drawn up the brackets for Percussive Maintenance V2 in sketchup now, so it's time to print off those (and the parts for Hello, World!) and put together the prototype. Good thing I've got a long weekend with bank holiday monday!
Thomas

If you use 4 motors, it's much more difficult to make weight. It is of course, still possible, but there will be less room for other stuff (like armour).

I am having fun trying to design a 4wd 2x motor... dunno if it will ever make it off the drawing board.
Robots: Betsie - RaspberryPi controlled flipper bot with gyro stablisation - too clever for her own good?
Stacie - tidy flipper; 4wd driven by hair bands
Top

I was thinking of doing 4 motors, but I haven't really thought it out yet - I'll have to do some calculations on weight and space before I finalise the design.
Thomas

Update time! So, Hello, World!'s chassis is coming along nicely. The brackets are now printed out with 90% infill compared to the previous 15%, so they should hopefully survive more than one hit from a spinner!

The redesign of Percussive Maintenance is going well. I've cut out all the polycarbonate panels and printed off the 3D parts, also at 90% infill. The bot is wider at the top so it should rest falt when upside down (weight distribution depending), and should allow for a bit more wiggle room inside for the electronics. 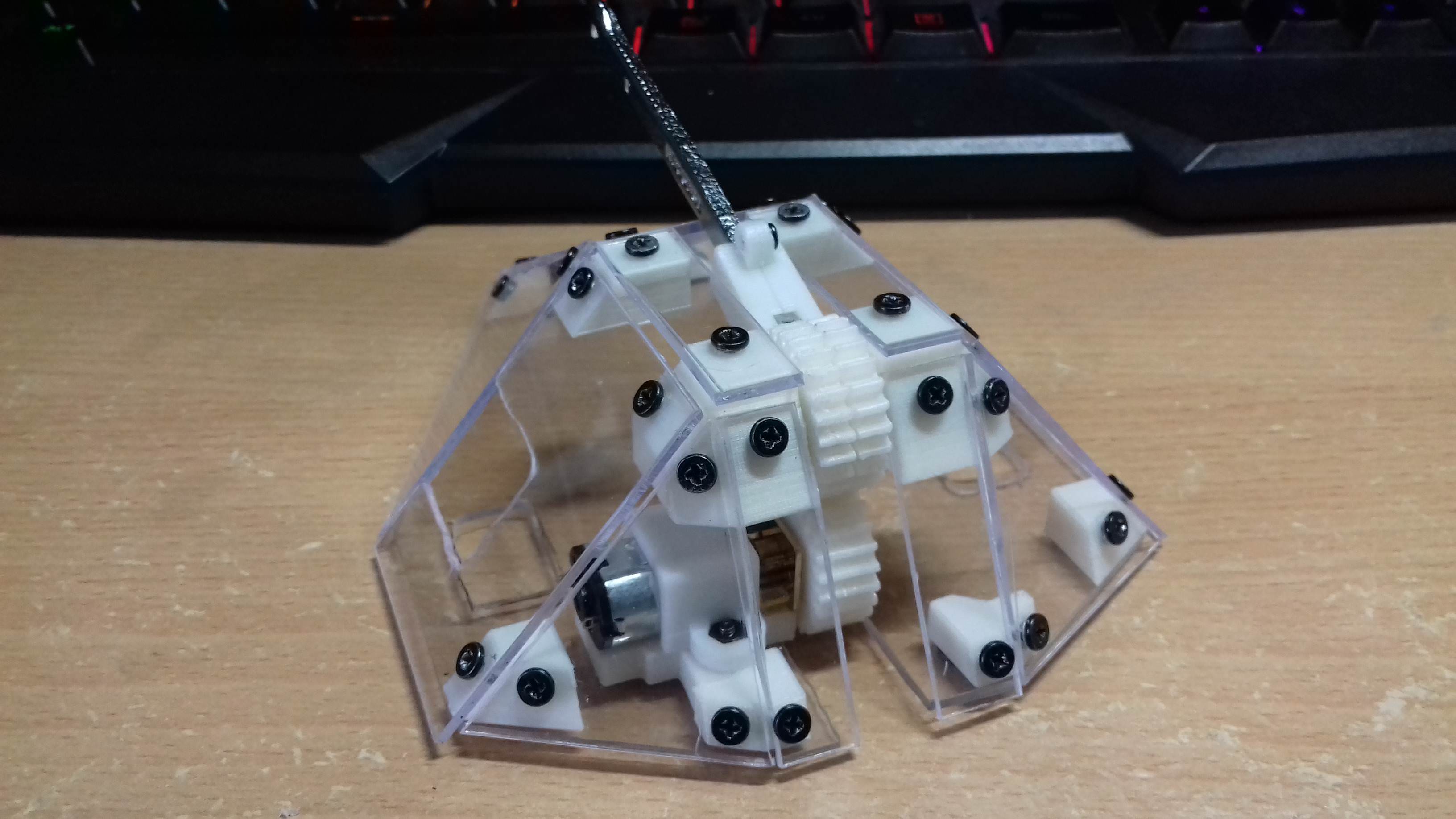 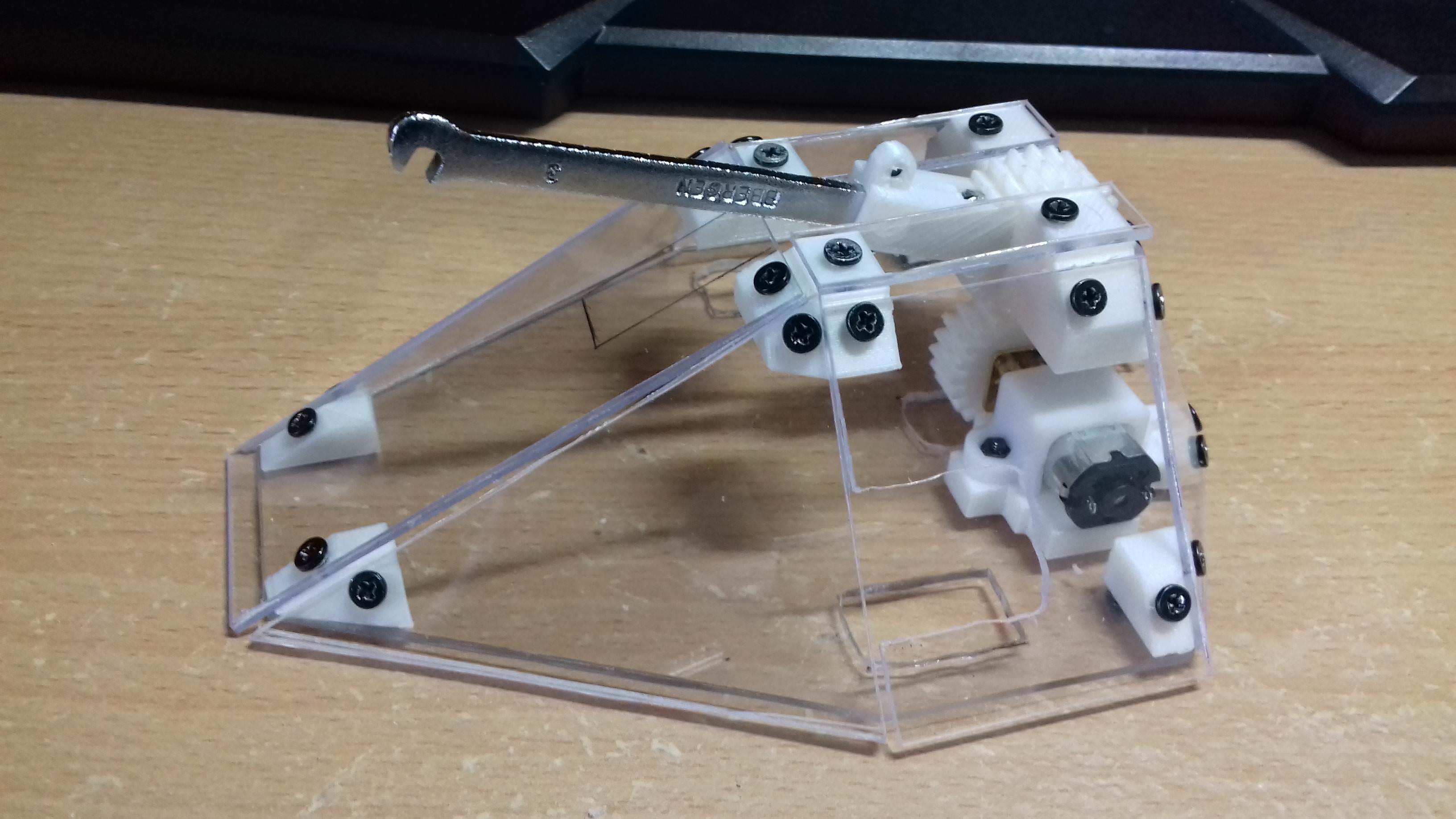 There's a bit that I've still yet to cut from the back, which will allow the spanner to lay horizontally when at rest.

I'm still surprised by the quality of the printer despite it being fairly cheap. The axe has been raised and is now powered via a gear from the motor, using a 3mm carbon fibre rod as the axle. Doing this means that the axe strikes from a higher position, it should be more effective (not that this weapon was supposed to be effective in the first place!). Hopefully, the replacement motor I'm using can let it self right this time! 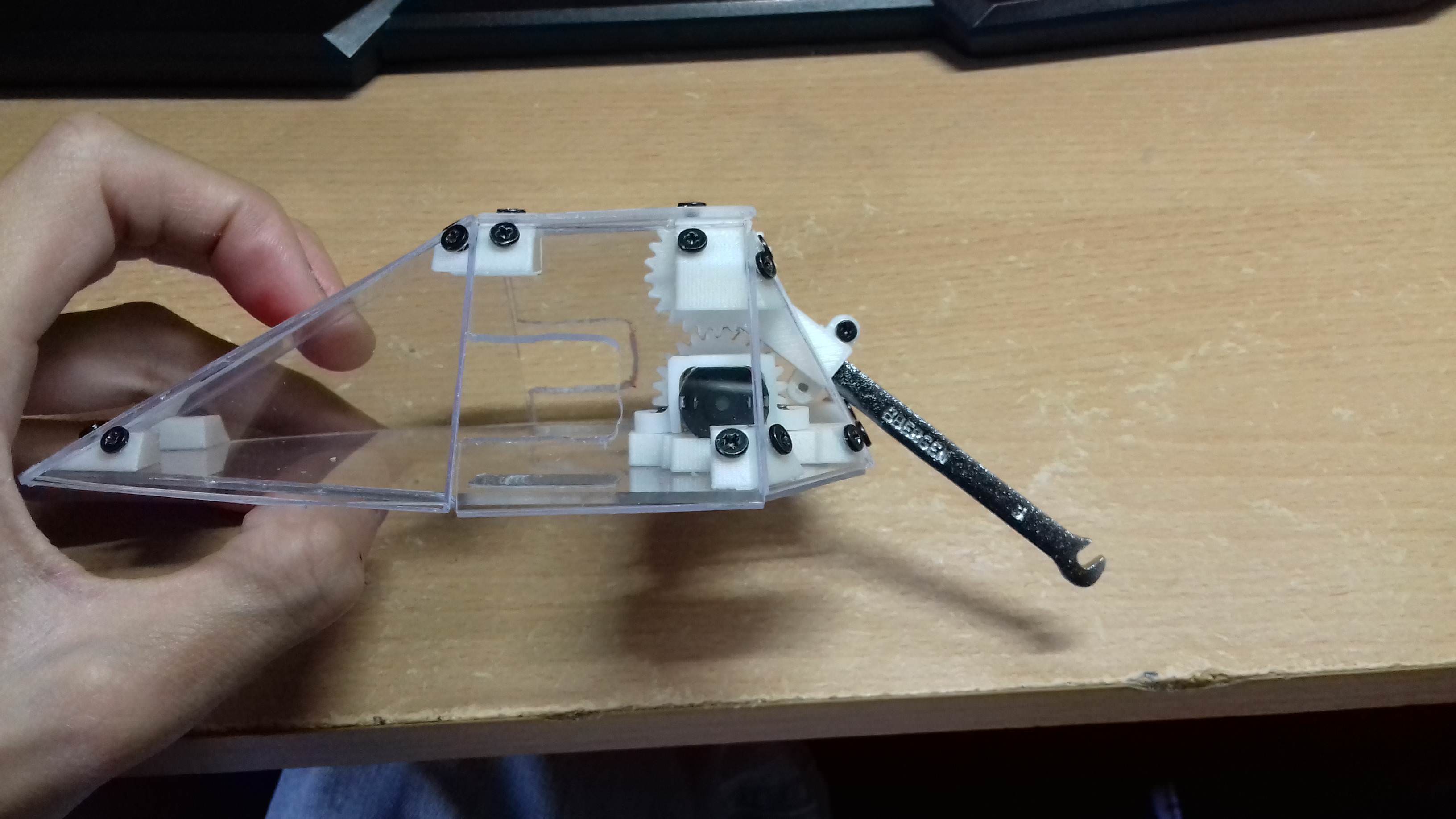 I'll also be switching the internals to use the same setup as in Hello, World!, which will save a lot of weight.

I should be able to finish off the rebuilds in time for next weekend, where I'll be able to work out the kinks at Robodojo.
Thomas

Looking forwards to seeing this at robo dojo. Will you be up for "testing" on my new spinner? Hopefully I'll win the balloon fight again.

Sure, I can fight your spinner! I do need to see if the increased infill is any better than before, or if I need to consider building an enclosure for my 3D printer so I can print in ABS.
Thomas

Wait till you see it. I am looking forwards to saturday.
Top

So I can't make it to AWS 56. Luckily, Robodojo are holding an antweight event the weekend after, so I should have enough time to sort out my bots.

I've spent this afternoon troubleshooting the problems with Percussive Maintenance at the last Robodojo social in September. The gist of it was that my receiver was connected to my transmitter, but for some reason the Arduino was not registering the fact that it was connected. I swapped the LemonRx between Hello, World! and Percussive Maintenance around and still had the same problem so that ruled out a problem there. Tried swapping out some wires to no avail either. I had a spare Arduino lying around so I tried swapping that out, and I got some life back into PM... but it could only move forwards or turn left.

I'm not sure I'll be able to get PM working properly if it is a problem with the motor driver, as I'll need to order a new one, but I've got all the parts lying around for the 4-bar lifter idea I have, so I think I'll try to get that built.
Thomas

'Have You tried Turning It off And On Again?' is progressing quite nicely. It's been designed and now I'm printing off the parts and cutting polycarb.

I had to throw away the 4-wheel idea, due to a lack of space (and maybe weight but I never got round to checking that). So it's been driven with 2 wheels at the back.

The back end is flat, so I'm going to add a 'spike' to tilt it back over. My friend had the brilliant idea of theming the spike for HYTTIOAOA (I need a snappier nickname for this bot!)!

The wheels are also a bit of an experiment. I was chatting with people at Robodojo and someone mentioned the possibility of using O-rings as tyres. I'm trying 22x2mm O-rings stretched out to fit a 31mm hub, for a total wheel size of 35mm, with 2 O-rings per wheel.

I also didn't account for the back end of the flipper arm when it flips. It's going to catch the drive motors, so I need to cut off the back end behind the rear pivot. Which will leave a hole in the top at the back as I don't have the time/material to cut a new panel as I still need to finish the construction and wiring.
Thomas

Ants:
Percussive Maintenance 2: Tech Support Boogaloo
Have You Tried Turning It Off and On Again?
It's Not a Bug, It's a Feature!
Working As Intended
Error 404 - Robot Name Not Found
Top
Post Reply
170 posts